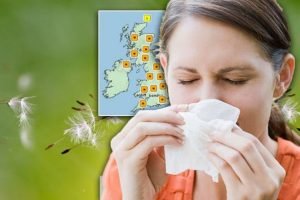 Hay fever is a common condition that’s caused by an allergy to different types of pollen, according to the NHS. Pollen is a fine powder that’s released by plants, and it contains proteins that can irritate the nose, throat and eyes. With around 20 per cent of the UK affected by hay fever, pollen count spikes could result in large numbers of runny noses and watering eyes. England, Wales and Scotland can expect ‘Moderate’ levels of pollen this May Bank Holiday Monday, it’s been revealed.

All parts of the UK, including Northern Ireland are at risk of hay fever symptoms

All parts of the UK, including Northern Ireland are at risk of hay fever symptoms this Bank Holiday, revealed the Met Office.

That’s because there are ‘Moderate’ pollen levels forecast across the British Isles.

The only exception is Scotland’s Orkney and Shetland Islands, which has been forecasted ‘Low’ pollen levels.

If you do start to develop hay fever symptoms, they’re likely to be caused by tree pollen at this time of the year, it said.

If you live in any of these areas, it’s a good idea to avoid drying clothes on an outdoor washing line, as pollen could stick to your clothes.

Putting petroleum jelly around your nostrils could help to trap pollen before it hits your airways. 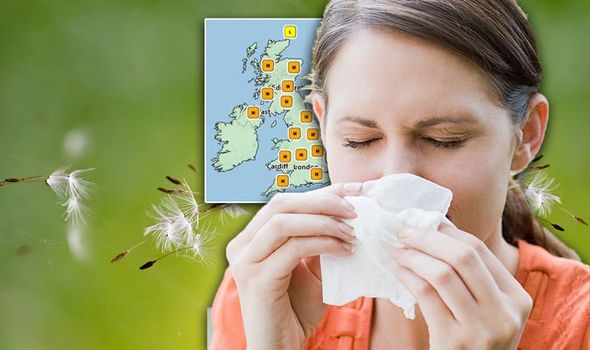 Alternatively, try wearing wraparound sunglasses to stop pollen from getting into your eyes.

“Nasal allergen barrier balms may be useful, when applied around the nostrils, can help to prevent allergens entering the nose and triggering symptoms,” said charity Allergy UK.

“Monitor pollen forecasts daily and stay indoors wherever possible when the count is high [generally on warmer, dry days].

“On high pollen days, shower and wash your hair after arriving home and change your clothing [as pollen is virtually indestructible unless wet, so will stay on hair, body and clothing].

“Keep windows closed when indoors. This is most important in the early mornings, when pollen is being released, and in the evening when the air cools and pollens that have been carried up into the air begin to fall to ground level again. 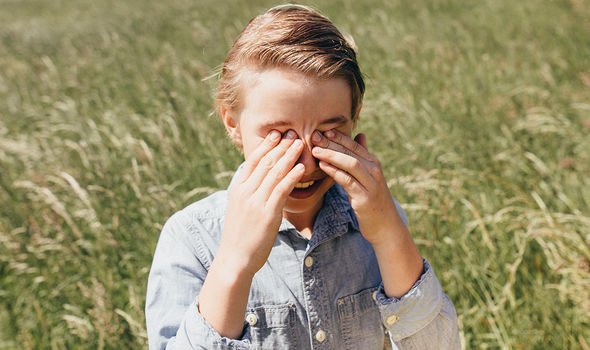 “A hat with a peak or large brim can help keep pollens from your eyes and face.”

If you’re driving in your car, try keeping the windows closer and the air intake on recirculate, added the charity.

Hay fever causes cold-like signs and symptoms, including a runny nose, itchy eyes, congestion and sneezing. Some people could even develop a loss of smell, facial pain, earache, and tiredness.

But, the symptoms vary depending on how much pollen is in the air, as well as between different individuals.

Speak to a doctor if your hay fever symptoms are affecting your day-to-day life, or if over-the-counter medication isn’t helping.