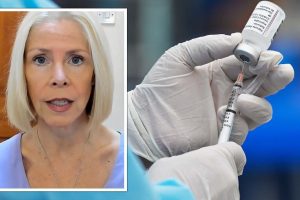 The AstraZeneca jab is currently only used to provide the first and second doses of the Coronavirus vaccine. Linda Bauld from Edinburgh University explained that offering the AstraZeneca vaccine as a booster is no longer the “most effective” way to immunise people against the virus “based on research”.

A vaccine trial called COV-BOOST was undergone by multiple research centres and dozens of academics to find out the best method of immunising people beyond their first and second jab.

They found that the mRNA based vaccines, both Pfizer and Moderna, were the most effective as booster jabs.

“And that means Pfizer and Moderna have been used for the initial booster and now for the additional pone that’s being rolled out.

“When that’s either on top of the first vaccines, it looks to be the most effective approach.”

However, she noted that some people may still receive the AstraZeneca jab if they have allergies to the ingredients in either of the mRNA vaccines.

This jab is also still being used worldwide to offer first and second doses, which combined with the mRNA boosters seems to be the most effective approach to protecting against the virus

Unlike the Pfizer and Moderna jabs, AstraZeneca is a vector vaccine meaning that exposes people to a modified version of the virus.

The mRNA jabs are designed to create specific proteins which trigger your body to produce antibodies to attack the virus.

She said: “So all of our vaccines are important, we’re lucky to have so many of them.

“But for the boosters, the main raiontale for the mrna vaccines primarily being used was just based on research.”

Many Britons are now eligible to get their fourth vaccine dose.

The second booster is currently being offered to adults over the age of 75, adults aged 75 and over as well as residents in care homes for older adults.

Those aged 12 and over with weakened immune systems are also being offered the fourth dose.

Based on testing data published by the Office for National Statistics (ONS), the rate of Covid infections has fallen for the first time since January.

Across the UK, 3.8 million people are estimated to have had Covid-19 in the week leading up to April 16.

This is down from 4.4 million the previous week.

It is estimated that 70 percent of the population has contracted the virus at least once since April 2020.