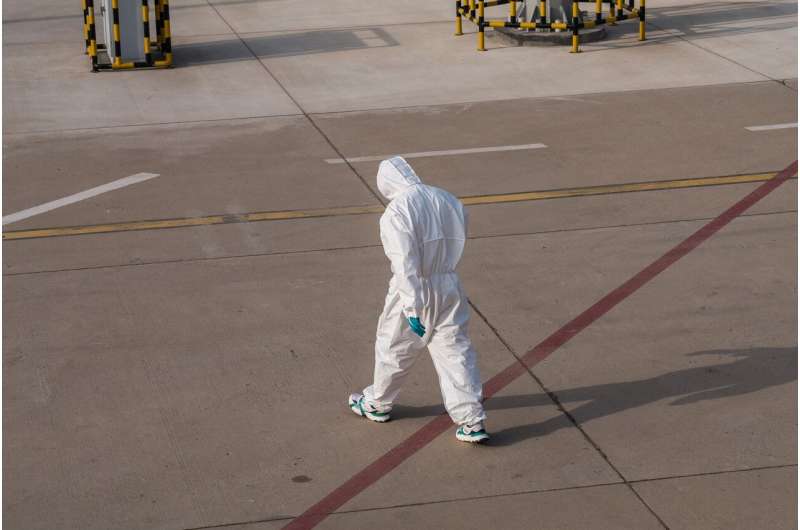 Epidemiologists and public health officials have a new predictive tool to analyze the course of pandemics, thanks to a mathematical formula derived by a University of Alabama in Huntsville (UAH) professor in partnership with a collaborator who is a UAH alumnus.

In work a journal reviewer referred to as seminal, they provide a mathematical solution to a model which describes chemical autocatalysis. Based on an analogy they draw between autocatalysis and epidemiology, their formula accurately predicts the future spread of a pandemic, as well.

The formula, which the researchers say is simple to evaluate, can be used to judge the effects of various mitigation measures designed to stem the epidemic. As such, they say it can aid public health authorities in their efforts to deploy resources to mitigate a pandemic’s effects.

Created by Dr. James Baird, professor of chemistry at UAH, a part of the University of Alabama System, and Dr. Douglas A. Barlow of Alderman Barlow Laboratories in Trenton, Fla., the formula calculates the spread of diseases of either viral or bacterial origin and takes into account the effects of various mitigation efforts such as masking, social distancing, quarantine, vaccination rates and the efficacy of medical treatment.

“In this sense, an autocatalytic reaction is completely analogous to the spread of an infectious disease,” Dr. Baird says. “In the disease case, contact between a susceptible individual and an infectious individual results in two infected individuals.”

According to Dr. Baird, the formula he derived with Dr. Barlow is a highly accurate approximate solution to the mathematical theory of epidemics developed in 1927 by the British scientists W. O. Kermack and A. G. McKendrick, who published their results in the Proceedings of the Royal Society. Kermack was a biochemist and McKendrick was a British army physician, whose mathematical intuition rivaled that of many professionals.

“Kermack and McKendrick showed that, if the rate of transfer of the infectious organism was faster than the rate of recovery of the population of infected individuals, then the disease would spread,” Dr. Baird says.

“If the reverse is true, the disease will go extinct,” he says. “Although Kermack and McKendrick gave a proof of this assertion, they were unable to provide an exact, closed form, analytic solution of the basic differential equation that governed the time development of the various populations.”

No one since has been able to find an exact solution to that equation that doesn’t require several pages to write down.

“My coauthor Doug Barlow and I fared no differently from our predecessors in the search for an exact solution,” says Dr. Baird. “We did, however, find the next best thing, which was an approximate analytic solution that can be written down on one line.”

Dr. Baird presented the model in May at the Southeastern Theoretical Chemistry Association meeting in Atlanta.

“The World Health Organization could program our equation into a hand-held computer,” Dr. Baird says. “Our formula is able to predict the time required for the number of infected individuals to achieve its maximum. In the chemical analog, this is known as the induction time.”

The formula is capable of predicting the number of hospitalizations, death rates, community exposure rates and related variables. It also calculates the populations of susceptible, infectious and recovered individuals, and predicts a clean separation between the period of onset of the disease and the period of subsidence

“During the onset, the number of infected individuals steadily increases, and as a result the rate of increase in the number of recovered individuals accelerates,” Dr. Baird says. “To slow down the spread, mitigation effects need to focus their attention on a parameter known as R-zero.”

To reach the extinction phase, public health officials want to decrease the rate of spread while increasing the rate of recovery. “The period of subsidence of the disease begins after the number of infected individuals has reached its maximum,” Dr. Baird says.

“Among our results is also a formula, which when combined with population data collected during onset, can be used to predict the time when the number of infected individuals needing hospitalization is expected to reach its maximum,” Dr. Baird says.

“To get an idea of the accuracy of our formula, we compared its predictions with that of a numerical solution of the Kermack-McKendrick equation that we generated using MathCad computer software,” he says. “In all cases tried, the difference between our analytic solution and the computer solution was never greater than 2%.”

Dr. Baird’s curiosity was sparked in 2020 by news reports describing the rapid increase in numbers of people infected by COVID-19.

“The rate of infection initially accelerates until it reaches a point where the infection rate is balanced by the recovery rate of infected individuals, at which point the number of infected people peaks and then starts to decay,” he says.

That mechanism reminded him of the mechanism that governs an autocatalytic reaction.

“I subsequently learned that the mathematical description of the spread of infectious diseases was first described by Kermack and McKendrick,” Dr. Baird says.