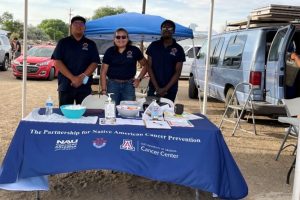 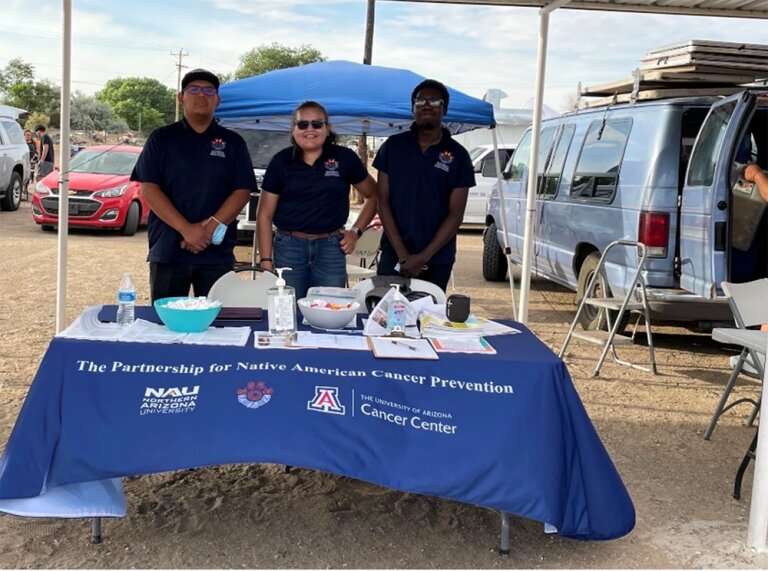 How can you eliminate a pervasive, yet undiscussed, bacterial infection from the Navajo Nation? For a collaborative group of researchers, it requires dedication, hours of travel and unfailing commitment to present information in a respectful, culturally relevant way.

Helicobacter pylori, known as H. pylori, is one of the most common bacterial stomach infections worldwide and accounts for nearly three-quarters of all gastric cancer.

While gastric cancer has decreased in the United States, the incidence in the Navajo Nation is nearly four times higher than non-Hispanic white populations in the area.

In a recent paper, “Helicobacter pylori Prevalence and Risk Factors in Three Rural Indigenous Communities of northern Arizona,” published in the International Journal of Environmental Research and Public Health, researchers from the University of Arizona, Northern Arizona University and San Diego State University explored the results of a study on H. pylori they conducted from June to August 2018.

The team recruited 106 self-identified Navajo adults from 73 households living in three Navajo chapter communities in the southwestern part of the Navajo Nation in Arizona. Their results found that 56.4% of study participants had H. pylori, and 72% of households had at least one infected person.

Robin B. Harris, professor of epidemiology in the UA Mel & Enid Zuckerman College of Public Health, was the principal investigator. “The devastation of stomach cancer is a primary reason for the NACP-funded team to know the causes of Helicobacter pylori infection,” Sanderson said. “In addition, the NAU team conducted semi-structured interviews to explore the knowledge, attitudes and behaviors of Navajo adults on Navajo Nation and in urban areas surrounding the Navajo Nation––Arizona, New Mexico, Utah and Colorado. The NAU team are members of Navajo Nation, so our work is personal as we want to save lives for our Diné extended family.”

In 2017, researchers from UA and NAU formed the Navajo Healthy Stomach Project, through the Partnership for Native American Cancer Prevention (NACP), to determine the prevalence of H. pylori infection among Navajo adults and to identify the local social, behavioral and environmental factors associated with infection.

According to the National Institutes of Health, H. pylori infection usually occurs in childhood. The infection can increase the chance that a person may develop gastric cancer.

H. pylori bacteria are usually passed from person to person through direct contact with saliva, vomit or stool and may also be spread through contaminated food or water, crowded living conditions or living with someone who has H. pylori.

“It was essential to include someone on the team who was fluent in Navajo because these three communities we had worked with on this on this study are located in a part of the Navajo Nation that is pretty rural, where more households speak Navajo as their primary language and live several miles away from a paved road,” Chief said. “So, if you are investing 30 to 45 minutes traveling on a dirt road to get to a home, you want to make sure someone on the team can communicate effectively with household members once you get there. In many cases, those are our elders.”

Each participant also took a non-invasive C-Urea Breath Test, which detects the presence of H. pylori in expelled breath; specimens were analyzed by machine at the Winslow Indian Health Care Center in Winslow.

After the researchers mailed the results to participants, a Navajo community health representative visited every person to make sure they received their test results and provided additional education to them.

They found H. pylori in 66 participants of the 101 viable UBT tests; 78% were male and 57% were female. The odds of having H. pylori increased for households with unregulated water, and the Navajo Healthy Stomach Project identified water sources as a primary environmental or household risk factor for infection.

The Navajo Healthy Stomach Project also found that there was generally a low level of awareness of H. pylori, with only 24% of the participants reporting they had heard of the infection.

The project’s future work will address barriers that prevent people who test positive for H. pylori from getting treatment and expand education through medical centers for earlier diagnosis.

Since the H. pylori infection typically begins in childhood or early adulthood, the researchers said they hope to develop a follow-up study to target participants under the age of 18 and to expand the number of participants in the 18–29 age range.

The team plans to continue to explore the causes of H. pylori, with a goal of eradicating the disease and to address unregulated water for drinking and cooking.