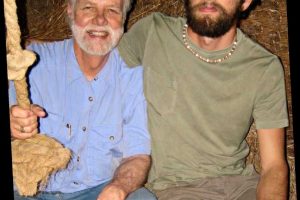 Whitney Dafoe spent most of his 20s visiting doctors and undergoing tests to find an explanation for why he felt so weak and exhausted.

"I was open to all possibilities," recalls the one-time globetrotting, aspiring photographer, who often spent months at a time backpacking through remote locations around the world, only to return home run-down and ill from his treks.

"I just wanted answers," he tells PEOPLE. "So many doctors told me that nothing was wrong with me because the lab results kept coming back negative. I even tried to talk my therapist into the idea that I had a psychological illness, but he would have none of it."

It wasn't until 2012, when Whitney was 29, that a doctor confirmed he was suffering from a severe case of myalgic encephalomyelitis/chronic fatigue syndrome (ME/CFS), a mysterious disease believed to affect as many as 2.5 million Americans.

"There's no definitive [diagnostic] test," says his father, Ron Davis, 79, a renowned professor of biochemistry and genetics at Stanford University, who has spent the past nine years searching for a cure for the disease that's characterized by debilitating exhaustion, cognitive dysfunction and other symptoms.

"It's all done by looking at a patient's various symptoms."

Whitney ended up moving back home because he was so weak.

"It was like opening a door to a world of chronic illness that we never knew existed," says his mom, child psychologist Janet Dafoe, 71, who who — like her husband — has barely left her home since 2012 in order to provide around-the-clock care for their son.

Whitney, who was soon unable to tolerate most sounds or visual stimulation because of the stress it causes him, lost 70 lbs. and became too weak to leave his bed, eat or even talk —leading a surgeon to insert a feeding tube into his abdomen. "I lost everything that's part of being alive and entered a world full of nothing but pain, loss, agony," says Whitney, who summoned the strength to text his responses to PEOPLE's questions in an effort to raise awareness about his illness.

"It's beyond what anyone who hasn't had severe ME/CFS can probably imagine. It's beyond just feeling tired. It's like a living death."

Moved by his son's plight, Ron — whose gene mapping techniques have revolutionized the field of modern biology and were used in the Human Genome Project — has assembled some of the world's greatest scientists, including several Nobel laureates, to help with his efforts to find a cure.

Using technology developed in his dad's lab at Stanford, hundreds of tests have been performed on Whitney, as researchers search for molecular traces of viral and bacterial infections, even parasites, that may have helped the disease take hold.

Ron, whose Open Medicine Foundation is continually trying to raise money for research, has been making headway in his search for a cure.

For more on Ron's battle to help his son survive, pick up the latest issue of PEOPLE — on newsstands Friday.

His group recently learned that the immune cells, taken from the blood of those diagnosed with ME/CFS, conduct electricity differently than the immune cells of healthy individuals — a discovery that could one day lead to the first diagnostic test for the disease.

Says Ron, who tells the story of his family's ongoing fight to keep Whitney alive in a new book, The Puzzle Solver: "I don't care who solves this. I just know that it can be solved using good reasoning and good experiments. There's something broken here and I know we can fix it."

Whitney agrees and is convinced that his dad will one day uncover the cause and the cure for ME/CFS.

"What my father is doing gives me so much hope," he says. "He's a brilliant problem-solver and maybe the best person alive to figure this illness out."