Research provides a roadmap for new therapies to treat chorioamnionitis 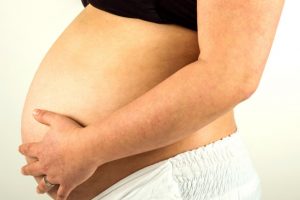 One of the serious complications that can occur during late pregnancy happens when the amniotic sac (also called the bag of waters) breaks too early, which can allow bacterial infections to cause dangerous tissue inflammation around the placenta.

Infant deaths from chorioamnionitis are rare, but aggressive use of antibiotics to prevent infections is common in suspected cases. Unfortunately, those antibiotic treatments also can interfere with the formation of tiny vital air sacs called alveoli and disrupt formation of the lungs' immune defenses. As a result, newborns treated for chorioamnionitis face higher risks of developing bronchopulmonary dysplasia (BPD). As survivors grow, they also face higher risks of developing asthma and struggling with other lung infections later in life.

Details were published online March 30, 2022, in Science Translational Medicine. The first author is Andrea Toth, BCE, an MSTP student in the Molecular and Developmental Biology Graduate Program, and the senior author is William Zacharias, MD, PhD.

"Our finding that IL1 and TNF blockade protects the lung from injury…provides proof of principle that anti-inflammatory therapies could be used in the future to treat infants. These data support the idea that future therapies targeting the immune system may hold promise for treatment of multiple kinds of perinatal inflammation," the co-authors state.

The drugs used in the study were anakinra, a potent IL1 receptor antagonist used to treat arthritis, and adalimumab, an anti-TNF monoclonal antibody used to treat ulcerative colitis. But these drugs may not be the medications that ultimately prove best for human therapy. More study is needed, co-authors say.

This finding has significant relevance as a roadmap for new therapies for chorioamnionitis to protect the lungs of infants and hopefully prevent BPD or other neonatal lung disease. These data are unique in that little is understood about the lung in the third trimester of pregnancy in humans, so beyond the therapy implications we define important biology about lung development that is directly relevant to human infants."

This study required a large team of experts at Cincinnati Children's, including members of the Perinatal Institute and the divisions of Pulmonary Biology, Developmental Biology, Immunobiology, and Biomedical Informatics. Five other collaborating institutions also were involved.

The team broke new ground just by detailing the molecular activities involved in developmental lung injury and chorioamnionitis. That work including building an "atlas" of the processes involved in developing lung tissue at a cell-by-cell level, all the way down to gene expression patterns and complex molecular signaling. The work then went on to evaluate potential ways to mitigate the lung damage. Going forward, more studies are needed to confirm that the anti-inflammatory approach can work in people, which medications would be safest, and at what points during pregnancy they would be most effective, Zacharias says.