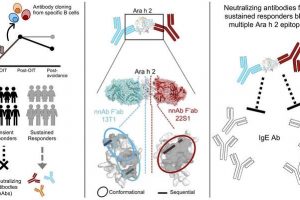 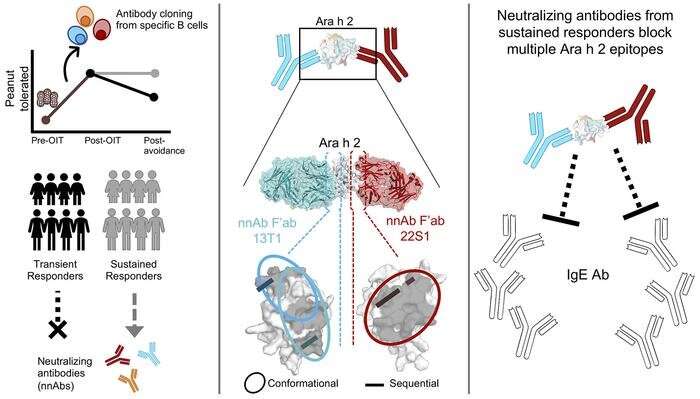 Food allergies are caused by IgE antibodies that are generated by the immune system and bind to allergens such as peanuts, triggering a reaction that in extreme cases can be potentially life-threatening.

New research by scientists at Massachusetts General Hospital (MGH), University of Paris Saclay, and the National Institute of Environmental Health Sciences (NIEHS) reveals why oral immunotherapy, which treats food allergies through incremental increases in consumption of the allergen, can lead to sustained tolerance in some individuals but only transient tolerance in others.

The findings, which are published in the Journal of Clinical Investigation, may help investigators improve allergy treatments so that all patients can benefit.

Ingestion of allergens through oral immunotherapy as treatment for food allergies increases blood levels of allergen-specific IgG neutralizing antibodies that can block IgE-mediated allergic reactions. Only a subset of individuals with peanut allergy develop sustained responses to oral immunotherapy, however.

“We hypothesized that in people with long-lived tolerance after peanut oral immunotherapy, allergen-specific protective antibodies may have unique properties—for example in how they recognize the allergen—that may result in their ability to more effectively neutralize the allergen on exposure and therefore result in tolerance,” says senior author Sarita U. Patil, MD, an assistant in Medicine at MGH and an Assistant Professor at Harvard Medical School.

To investigate, Patil and her colleagues analyzed blood collected from pediatric and adult participants of two peanut oral immunotherapy clinical trials at MGH, and they applied a fluorescence-based method developed previously by Patil to identify cells in the blood that make antibodies against the peanut allergen.

A team of researchers at NIEHS led by Geoffrey Mueller, Ph.D. was able to specifically identify these important regions. “We were able to use X-ray crystallography to see some of the first complex structures describing how human antibodies interact with peanut allergens,” says Mueller. “After studying allergens for so many years, it was very gratifying and an important new development.”

“Our paper is the first to describe neutralizing antibodies in allergy, describe their mechanism, and identify tools to assess their efficacy in preventing allergy IgE antibodies from binding to the allergen,” says Patil.