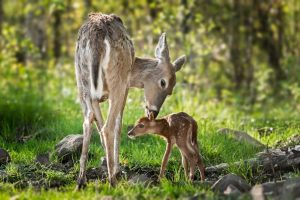 Wildlife reservoirs of viruses with a broad host range can facilitate the emergence of human-infecting viral variants. There is phylogenomic evidence of the continuous transmission of SARS-CoV-2 from humans to Odocoileus virginianus or white-tailed deer in North America. However, there is no evidence of viral transmission from deer to humans.

In the present study, researchers determined the extent of SARS-CoV-2 infection in white-tailed deer and the chances of deer-to-human transmission of the virus.

During the yearly shooting season between 1 November and 31 December 2021, the team sampled 300 white-tailed deer in Eastern and Southwestern Ontario, Canada. Most white-tailed deer in the sample were adults, with equal proportions of males and females. Approximately 213 nose swabs and tissue samples were obtained from 294 retropharyngeal lymph nodes (RPLN). These were analyzed by reverse transcription polymerase chain reaction (RT–PCR) for SARS-CoV-2 ribonucleic acid (RNA).

The prevalence of mutations was evaluated in the Global Initiative on Sharing All Influenza Data (GISAID) and within animal-derived variants of concern (VOC) to recognize and contextualize essential mutations. This was achieved using five complete deer-derived sequences along with human-derived sequences.  Viral isolation was performed on Vero E6 cells that expressed human transmembrane protease serine 2 (TMPRSS2) to test the infectivity of the SARS-CoV-2 positive samples.

Out of the 213 nose swabs collected, five tested positive based on the results of two independent RT-PCR analyses conducted at separate institutions. Additionally, 16 RPLNs were validated by PCR. SARS-CoV-2 RNA was found in 21 samples, which accounted for 6% of white-tailed deer harvested by hunters. All SARS-CoV-2 positive animals were adult white-tailed deer found in Southwestern Ontario, with the majority female.

Combining the sequence data obtained from the amplicon and capture-probe led to the recovery of five high-quality genomes with two incomplete genomes. Most of the non-SARS-CoV-2 reads matched that of the reference genome of the white-tailed deer, indicating that contamination with human-derived SARS-CoV-2 sequences was extremely unlikely. The team also noted that the viral genomes derived from the deer samples created a highly divergent clade in the B.1 Phylogenetic Assignment of Named Global Outbreak (PANGO) lineage/20C Nextstrain clade, which had a most recent common ancestor (MRCA).

The Ontario deer lineage constitutes a very lengthy branch having 76 conserved nucleotide mutations compared to those in the SARS-CoV-2 Wuhan Hu-1 strain and 49 as compared to their most recent common ancestor with other GISAID genomes. Human-derived sequences obtained from Michigan, US, were estimated to share an MRCA between May and August 2020 with the Ontario deer lineage. These sequences obtained from humans are closely connected to a mixed clade of mink and human sequences collected in September and October 2020 in Michigan. The white-tailed deer lineage in Ontario has been identified as PANGO lineage B.1.641.

Among the 76 mutations that were similar among the six B.1.641 sequences, nine were in the SARS-CoV-2 spike (S), while 51 were in the open-reading frame (ORF)-1ab. The six nonsynonymous mutations in S include five substitutions and a six-nucleotide deletion. These S mutations, except H49Y, evolved before the divergence of B.1.641 lineage from the MRCA shared by the Michigan samples. Furthermore, only a few S mutations were preserved throughout B.1.641, S:L1265I, and S:613H and were unique to the human sample. Three other nonsynonymous mutations were detected in either 4658 or 4662 white-tailed deer samples, while 4662S:L959 exhibited a frameshift.

The team observed that four days post-infection, four of the samples displayed that 50% or less of the cell monolayer was affected by the cytopathic effect. In comparison to the original swab consensus sequences, confirmatory sequencing revealed only small frequency variations corresponding to one or two single-nucleotide polymorphism (SNP) changes.

Unlike SARS-CoV-2 Omicron, which needed three vaccine doses to neutralize B.1.641S, sera from vaccinated patients who had received two or three doses and sera from convalescent persons effectively neutralized all B.1.641S proteins. Importantly, there was no change in the neutralizing ability of sera against SARS-CoV-2 D614G or other SARS-CoV-2 isolates from Ontario white-tailed deer. Collectively, these findings imply that mutations in the S-gene of the white-tailed deer do not have a significant antigenic effect on antigenicity.

Overall, the study findings highlighted a distinct SARS-CoV-2 lineage in white-tailed deer and provided evidence of host adaptability and transient transfer from deer to humans. White-tailed deer have numerous characteristics essential for a viral reservoir to be sustained, including social behavior, highly transitory populations with multiple human–deer encounters, high density, and sylvatic relationships with other animals.