Home » Health News » Scalp popping warning over dangerous TikTok trend – what is it?

Scalp popping warning over dangerous TikTok trend – what is it? 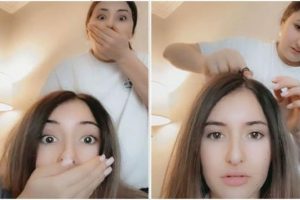 Scalp popping is the latest trend to have gone viral on the video-sharing app TikTok. The hair pulling trend appears to have originated on the platform from a user named Yana Semerly.

Her video, showing two friends trying out the bizarre scalp practise, has amassed more than 833,000 “likes” so far.

Though the video has gone viral, the stomach-churning popping noise is not for the faint-hearted.

Despite this, users have flooded the comments section saying they are either going to try it or have already tried it.

But experts have warned this is one trend TikTok enthusiasts should avoid taking part in.

What is scalp popping?

In short, the scalp popping trend sees people pulling on strands of their hair in order to create a popping sound from the scalp.

Users gather small sections of hair together, twist them tightly around their fingers and then pull as hard and as quickly as possible.

The popping sound that you can hear is caused by the galea aponeurotic.

This is a soft sheet of tissue connected to your scalp.

When the hair is pulled with sudden force, the galea aponeurotic is forced to pop upwards and off the skull.

In another TikTok video, a Detroit-based plastic surgeon shared some medical insight into the trend.

Anthony Youn MD said: “This is where you pull the hair so hard that you pull the galea off of the skull creating this popping sound.”

He did not seem too impressed by the practice, asking: “What the hell is going on here?”

However, in some cultures scalp popping is actually practised by barbers or as a form of head massage.

Previously, Jon Musgrave, a licensed massage therapist told Health.com: “It’s not a standard Western massage technique, and it’s not something that I would do to myself or to someone else.”

Why is scalp popping recommended against?

Since the video gained popularity, a number of health experts have suggested scalp popping could have some undesirable effects.

Dr Ross Perry, medical director of Cosmetics Skin Clinics told Tyla: “Firstly you can easily tear the inside of the scalp which can lead to bleeding and possible infections, it can become sore and extremely uncomfortable.”

What is happening where you live? Find out by adding your postcode or visit InYourArea

He said that the trend could “cause damage to the hair follicle on a long term basis” which could result in “hair loss”.

Dr Perry added the act of scalp popping could even result in damage to both the neck and head as a result of “the force of the hair being pulled”.

Instead, the expert recommended people do not try the trend.

He said: “In my opinion, it just isn’t even worth attempting.”