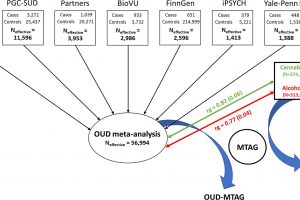 A new human genomics study led by Yale scientists has identified genetic risk factors for opioid use disorder (OUD) and related substance use disorders according to a new large-scale genome-wide association study—increasing the number of risk genes known from 1 to 19.

This work comes as opioid-related overdoses have reached an all-time high in the United States and continue to surge around the world. The findings, published in Molecular Psychiatry, address a pressing need as genetic discovery for OUD has been limited in recent years. Genetic discovery leads to better understanding of biology.

Senior author Joel Gelernter, MD, Foundations Fund Professor of Psychiatry and professor of genetics and of neuroscience at Yale, said not much is known about specific genetic factors that influence risk for OUD. In this study, researchers worked to increase knowledge of OUD genetics by completing a meta-analysis for OUD—that is, putting together data from many different studies—and then by incorporating genetic information from other related substance use disorders for more gene-finding power.

Researchers examined genetic data from over 600,000 participants of European and African genetic ancestry, more information than prior studies on OUD risk variation. The scientists identified genetic variation in 19 genes that was associated with OUD risk; OPRM1 and FURIN were two genes identified in the analysis of OUD alone, with many more genes identified in the analysis that incorporated information from OUD along with cannabis use disorder and alcohol use disorder.

“OPRM1 is a gene that encodes mu opioid receptors in the brain making it a prime genetic possibility for OUD—prior work showed that variation in this gene influences OUD risk. Our challenge was to move beyond OPRM1,” Gelernter said.

“Our effort brought in as much genome-wide data as possible. We wanted to compile as many datasets and samples as we could,” said Joseph D. Deak, Ph.D., postdoctoral fellow in the Yale Department of Psychiatry Division of Human Genetics and the paper’s first author. “We believe our findings have identified genetic risk specific to OUD as well as genetic risk shared more broadly with other kinds of substance use disorders. That is consistent with prior studies that show specific genetic effects for certain drugs along with shared genetic liability for substance use disorders more broadly.”

The findings also reveal genetic connections between the development of OUD and related conditions such as chronic pain, the inability to work because of a sickness or a disability, and other psychiatric outcomes like anxiety, depression, and PTSD. “These genetic findings line up with common features often seen in the clinical presentation of individuals diagnosed with OUD. We found that genetic overlap,” Deak said.