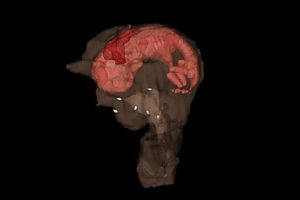 In new research from the Wake Forest Institute for Regenerative Medicine (WFIRM), scientists have shown that bioengineered uteri supported fertilization, fetal development, and live birth with normal offspring. With further development, this approach may someday provide a regenerative medicine solution for women with the inability to get pregnant due to uterine dysfunctional infertility

Published today in the journal Nature Biotechnology, the scientists were able to show that bioengineered uteri in an animal model developed the native tissue-like structures needed to support normal reproductive function.

“The study shows that engineered uterine tissue is able to support normal pregnancies, and fetal development was normal, with offspring size and weight being comparable to those from a normal uterus,” said Anthony Atala, MD, study principal investigator and director of WFIRM. “With further development, this approach may provide a pathway to pregnancy for women with an abnormal uterus.”

WFIRM scientists are world leaders in the field of regenerative medicine and a number of the basic principles of tissue engineering and regenerative medicine were first developed at the institute. Their strategy to bioengineer functional tissues using a patient’s own cells seeded onto biodegradable scaffolds has been effectively explored in preclinical studies and applied successfully in human patients to restore function in tubular and in hollow non-tubular organs. Regenerative medicine and tissue engineering technologies have emerged as an attractive option for overcoming donor organ shortages and other limitations of transplantation from donors. The scientists used the same bioengineering strategy to engineer the uterus, a more complex organ with higher functional requirements involving support of embryo implantation and fetal development.

For this study, rabbits were randomly assigned to four groups: (1) a tissue-engineered uteri group that received a cell-seeded scaffold using the animals’ own cells; (2) a non-seeded scaffold group, that received a polymer scaffold only; (3) a subtotal uterine excision-only control group, where the subtotal excision was repaired by suturing and (4) a normal control group, where animals underwent a sham laparotomy.

Rabbits have long been used in reproductive biology research and are ideal for uterine tissue regeneration studies as they have a relatively large uterus compared with other laboratory animals. The female rabbit’s uterus is formed by two separated, functional uterine horns and cervices, each with a capacity to carry a pregnancy.

The biodegradable polymer scaffold constructs were custom-made for each animal. The cells needed to regenerate the uterine tissue and seed the scaffolds were cultured and grown from the uterine structures of each rabbit. Six months after undergoing the scaffold implantation procedure, the rabbits were naturally mated with fertile male rabbits.

“The rabbits with cell-seeded constructs had normal pregnancies in the reconstructed segments of the uteri,” said co-author Renata S. Magalhaes, MD, Ph.D., BCMAS. “This research introduces new avenues for potentially creating tissue substitutes derived from a patient’s own cells to treat uterine defects.”

Uterine transplantation from deceased and living donors to patients has shown promise as a treatment for permanent uterine infertility although it requires the use of anti-rejection therapies.

END_OF_DOCUMENT_TOKEN_TO_BE_REPLACED

END_OF_DOCUMENT_TOKEN_TO_BE_REPLACED
We and our partners use cookies on this site to improve our service, perform analytics, personalize advertising, measure advertising performance, and remember website preferences.Ok