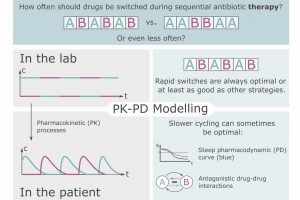 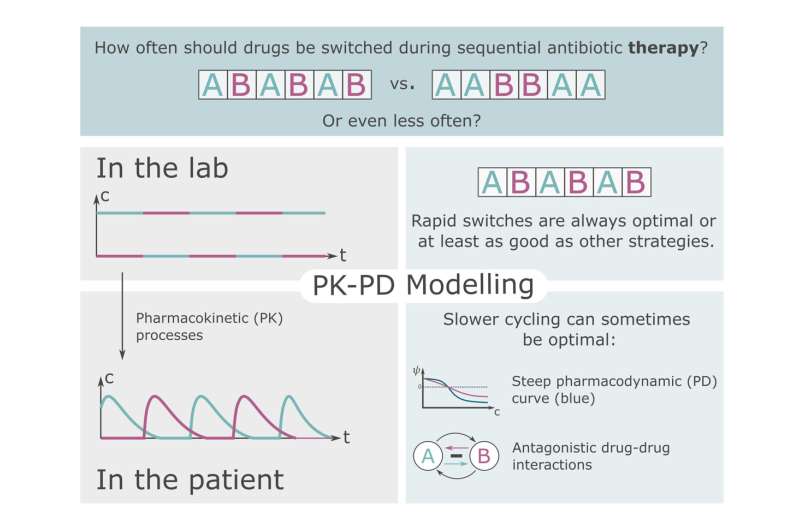 Recent research results from the Max-Planck-Institute for Evolutionary Biology in Plön (MPI) suggest that rapid switching of antibiotics during the treatment of a patient could successfully counteract the evolution of resistance. However, the optimal speed of switching the drugs depends on various factors. These include for example, the interaction between the drugs.

Laboratory experiments show that rapid switches between antibiotics can prevent the spread of resistance. Drug pairs that are collaterally sensitive could be particularly suitable for such therapies. This means that resistance to one drug causes the bacteria to become more sensitive to the other drug. However, the environmental conditions of the bacteria in the patient are clearly different from those in a laboratory.

An important difference is that the drugs can be switched abruptly in the laboratory, whereas in the patient, natural degradation processes lead to fluctuating antibiotic concentrations. There may be phases in which the doses of consecutive drug administrations overlap. During such overlap phases, interactions between drugs may influence the evolutionary dynamics.

To close the gap between the laboratory and a possible clinical application, doctoral researcher Christin Nyhoegen and research group leader Dr. Hildegard Uecker of the Stochastic Evolutionary Dynamics research group at the MPI in Plön set up two mathematical models for comparison—a “laboratory model” and a pharmacokinetic-pharmacodynamic “patient model.”

The analysis shows that in the laboratory, the treatment in which drugs are switched at every administration always suppresses the bacterial population at least as well as treatments with slower switching. While this is also often true when treating patients, sometimes a slightly slower switching can be beneficial. This is especially true when the bacteria replicate slowly and the pharmacodynamic curve is steep or the drugs interact antagonistically. “Our results show that sequential therapy might work well not only in the laboratory but also in the patient. However, the optimal strategy may vary slightly,” says Christin Nyhoegen.

When there is no resistance present before the treatment, collateral sensitivity does not provide a significant advantage unless the cell division rate is low and drugs are switched slowly. In contrast, drug-drug interactions have a major impact on the efficiency of treatments in which drugs are switched rapidly. This shows how important the interactions could be for the optimal selection of drug pairs.

The findings are published in the Journal of The Royal Society Interface.

Independent of the theoretical study, there are initial efforts to obtain indications of the effectiveness of sequential therapy in patients by means of observational studies. Results of this as well as of the theoretical study can provide a basis for the planning of randomized clinical trials, which, however, are not currently achievable.