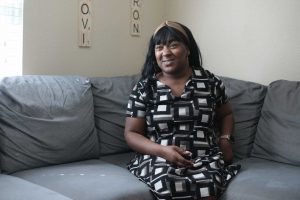 Cali Byrd is a junior at Booker T. Washington High School for the Performing and Visual Arts in Dallas. She remembers in eighth grade a group came to talk to her class about sexually transmitted infections.

“They had a bunch of tennis balls and wrote [the names] of STIs on them,” Cali said. “Then they had a couple of kids come up, put on gloves, and said, ‘If he throws the ball to her and she has a glove on, then she’s protected. But if she doesn’t have a glove on, then she’ll get the disease or something.’ It was really weird.”

Cali said the instructors never explained what the STIs were, just that people should wear condoms to prevent them. “It really was not helpful,” she said.

That presentation was the last time she got any formal sex education in school, she said. Health education is not a mandatory offering once kids enter high school.

In 2020, Cali started training to be a peer educator through Planned Parenthood of Greater Texas. “I learned about specific STIs, what they did, viral versus bacterial. I learned different methods of birth control,” Cali said. “It was a lot of catching up.”

After more than two decades, the Texas State Board of Education has updated its health curriculum, including sexual health, for elementary and middle school students. The new curriculum, which will be taught starting in fall 2022, includes detailed information about birth control and STIs for the first time.

But it leaves out key elements sex-ed advocates wanted to see. And despite the state’s high teen birth rate, a recent policy change by Texas leaders requires families to opt in rather than opt out of their children’s sex education, which means some kids might not receive any formal school instruction.

The new curriculum comes after years of work from organizations across Texas that are trying to mainstream conversations about sexual health.

“Your reproductive and sexual health is really important for your life,” said Terry Greenberg, founder of the North Texas Alliance to Reduce Unintended Pregnancy in Teens. “Not only does it determine your personal health, it’s the health of your family. If you’re not giving kids that, you’re not equipping them to be adults.”

Teen birth rates across the country have been declining since 2007, according to the U.S. Department of Health and Human Services. But Texas ranks among the top 10 states for high teen birth rates, with 22.4 teen births per 1,000 females ages 15-19, compared with California’s rate of 11 per 1,000, or Vermont’s at 7 per 1,000, according to 2019 data from the Centers for Disease Control and Prevention.

“I mean, any unintended pregnancy is kind of on us,” Greenberg said. “Why didn’t we supply people with what they needed?”

The new curriculum is still abstinence-first. But including detailed information on contraceptives and STIs is a win for Greenberg and advocates statewide, such as those with the Texas Campaign to Prevent Teen Pregnancy.

“These standards hadn’t been updated since ‘Titanic’ was out in theaters,” said Jen Biundo, director of policy and data with the organization. “It had been a minute.”

The new curriculum does not include instruction on consent, gender, or LGBTQ+ topics. Those omissions reflect a larger battle for control over what information kids can access, which has resulted in lawmaker-led book bans, attempts to curb school pride events, and opposition to gender-affirming care for transgender youth.

Texas and at least four other states have an opt-in policy. Students there will not be taught about sexual health, puberty, or reproduction unless parents — or other caregivers — give permission. Texas leaders, including Gov. Greg Abbott, said parents should have control over what their children learn in schools.

Biundo said she’s concerned that one missed piece of paper or email will mean some kids will miss the opportunity.

“When I think about the paperwork that I’ve fished out of my child’s backpack three weeks late, this kind of terrifies me,” she said.

“The big concern with the opt-in policy is that some kids will just slip through the cracks,” Biundo said. “Maybe they’re not living with a parent or guardian, or maybe they don’t have a parent or guardian who’s closely engaged. Those might be the kids that need this information the most.”

Greenberg said an opt-in policy is a “huge logistical barrier for kids.”

“Do you really care about the reproductive health of these kids? You have to give them information,” she said.

J.R. Chester has seen all this before. Slow updates and lack of access to information have been a pattern since she started as a community health worker with Parkland Health Hospital System more than 10 years ago.

“I was a repeat teen mom,” Chester said. “Our oldest is 16. He is just a year younger than I was when I got pregnant with him. Then, after I gave birth to him, three months later, we were pregnant with No. 2.”

The Dallas native said she doesn’t remember anyone explaining to her what contraceptives were, or why she menstruated every month.

“No one took the time to tell me, this is why your body is doing this,” Chester said.

Chester said her work is to make sure that kids can ask questions, without shame or guilt.

There are still a lot of myths about health and reproduction that Chester works to debunk, even with adults.

“A lot of my female students had no idea that sexual intercourse didn’t take place in the same hole that they urinated from,” said Chester. “They had this myth in their mind that ‘Oh, well, can’t you just pee it out?’ I hear that a lot as a method of pregnancy prevention.”

At home, she talks with her own kids about health at every stage of their development. For her younger children, that means using the anatomically correct names for body parts. With her teenagers, health conversations include discussions about boundaries and safe sexual encounters.

“A lot of our education in this household has been between parents and children,” Chester said. “That’s because I have the resources and the education to provide it. If I wasn’t in this role, and hadn’t been doing this for 10 years, I don’t know if I would know what to say to them, honestly.”

Cali said she wishes decision-makers at the state level would communicate with students like her as they craft the health education plan.

“They need to look at it from the perspective of a child in school,” Cali said. “You can’t make a law concerning how someone lives their life when you don’t understand how they live their life.”

Cali also thinks there’s too much left out of the new curriculum.

“That is honestly the root of all the problems, is if we just teach ‘Don’t have sex,’ you’re not teaching about sex,” Cali said. “I just hope we move past that and, instead, actually teach them what they need to know.”

The health curriculum implementation varies across districts and schools, but Chester hopes the recent changes will generate open conversations between parents and kids.

“I think people hear ‘sexual health’ and some of them get really squeamish about it,” she said. “But sexual health is your understanding of your body, your basic functioning, how you’re put together, why. That’s really harmful to shame something that is normal.”

“This really concerns us,” Chester said. “This means that if you have a child who has been abused by their parents, that child would have to get permission from their abusers to learn about child abuse. We think this runs the risk of withholding really crucial information from the kids that need it the most.”

This story is from a partnership that includes NPR, KERA, and KHN.