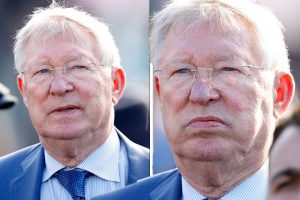 Sir Alex Ferguson’s career honours as a player and manager

The 80-year-old Scot is widely regarded as one of the greatest football managers of all time, winning more trophies than any other manager in the history of the beautiful game. But when speaking about the aftermath of his brain bleed a few years ago, Ferguson said that he felt “isolated” and “vulnerable” as he feared that he might never be able to speak again. Despite receiving life-saving surgery on his brain after the incident, Ferguson spoke about feeling lost hours after waking up from the operation that had saved his life.

In the run-up to the premiere of his 2021 documentary, Ferguson shared: “I was lost, really. I mean when I woke up hours later after the operation.

“You feel loneliness because you lie in your room, and they tell you what you’ve done and certain things about the operation.

“But when you’re in the bed and you’re thinking to yourself: ‘Are they telling me the truth?’

“You feel isolated, and I did feel vulnerable. I always remember, when my father had cancer, they never told him that he had cancer. So he asked me, and I didn’t know how to answer him, you know.

“So I’m thinking, my father would have been feeling exactly the way I feel, lonely and vulnerable.”

For the former football player turned manager, the whole ordeal was made worse by the fact that the brain haemorrhage happened suddenly, with no warning signs.

“It was sudden, and there is nothing you can do but to trust and that nurses and the doctors to sort you out. And that’s the point I’m saying about loneliness, when you’re on your own then, that question enters your mind: ‘Am I going to be alright?’

“You know, because just two days ago I was fit as a fiddle, playing a game of golf sometimes, on the bike and exercising, you never anticipate it was going to happen like that.”

The NHS explains that a brain haemorrhage is bleeding in or around the brain that occurs either as a result of a ruptured aneurysm or following a significant blow to the head. There are four main types of haemorrhage, all of which are named after the site where the bleeding occurs:

There are typically no warning signs with either a subdural haemorrhage or extradural haemorrhage, but for some individuals, they can experience the following symptoms during physical effort or straining, for example when coughing, going to the toilet or lifting something:

The NHS stresses that a subarachnoid haemorrhage is a medical emergency. Individuals are advised to dial 999 immediately and ask for an ambulance if you or someone in your care has these symptoms.

Ferguson’s surgery at Salford was led by neurosurgeon Joshi George, who is seen speaking during the film. At one point he reveals that there was “an 80 percent chance” the former United boss would not survive.

Revealing more about the physical and emotional toll the experience had on him, Ferguson added: “Regarding my health, I’m not actually in control. In the football world, and at United, I’m in control of the situation. I wondered how many sunny days I would see again. I found that difficult.

The star’s fears were exaggerated by the fact that following his surgery he was unable to talk for 10 days, as his voice just “stopped” working.

“I lost my voice, just could not get a word out, and that was terrifying – absolutely terrifying,” he reflected.

“And everything was going through my mind: is my memory going to come back? Am I ever going to speak again?”

The NHS explains that after a brain haemorrhage, there is a possibility of certain complications. This can include further bleeding at the site of rupture and brain damage caused by a reduction in blood supply to the brain.

Although recovery can be a slow and sometimes frustrating process, it is possible to overcome any lasting symptoms and side effects. There are a number of support groups that can offer information and advice for people who have had a brain haemorrhage, and their carers. Contact the Stroke Association helpline on 0303 3033 100, or you can email [email protected]