Home » Health News » Statins side effects: The ‘rare’ reaction to the lipid-lowering drug that occurs at night

Statins side effects: The ‘rare’ reaction to the lipid-lowering drug that occurs at night 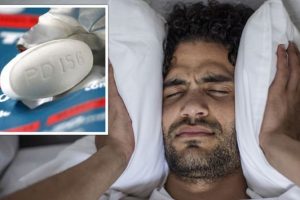 Statins are taken by more than six million Britons to lessen their odds of having a stroke and heart attack. The drug, however, isn’t short of side effects – the most notorious being muscle pain and diabetes. Other psychological side effects exist, some rare, some may prevail at night.

Statins work by lowering cholesterol levels to prevent them from clogging the arteries and causing blockages.

Generally, researchers warn that unless the risk of such ailments is high, the drug may do more harm than good.

But reported side effects are plentiful, with some claims of memory loss, cataracts, liver disease and nightmares.

READ MORE: Statins side effects: Five telltale signs in your urine – when to alert your doctor

Some studies have sought to explore how psychiatric and behavioural reactions may impact the daily lives of statin users.

To date, the five most frequently reported psychiatric events related to statin use are insomnia, somnolence, agitation, confusion and hallucination.

Other studies however have highlighted reports of nightmares after statin intake.

More data is needed; these findings are clinically relevant, however.

Nonetheless, this has prompted calls to investigate whether the time of intake could affect sleep.

Some experts have hypothesised that the probability of having nightmares is dictated by an individual’s sensitivity to the drug.

In one 2006 BMJ study, researchers suggested nightmares should inform the suitability of statins for different individuals.

They wrote: “Although it seems that nightmares are the occasional adverse effect of statins this is relevant for the patients and should be recognised by the treating doctor since it is easily corrected by stopping statins.”

Statins have strong associations with nearly 30 different side effects.

While most cause mild discomfort, others may be severe enough to make daily activities difficult.

There is a widely held belief that the drug’s side effects might in some cases be imagined, describing a notion known as the nocebo effect – the opposite of the beneficial placebo effect.

Findings published in the New England Journal of Medicine in 2020 seemed to suggest that individuals who have stopped taking the drug due to side effects could resume statin treatment knowing they might be experiencing the nocebo effect.