Staying hydrated may reduce the risk of heart failure 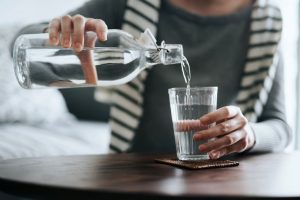 The study researchers analyzed information from more than 11,000 adults ages 45 to 66 and followed them for 25 years. To examine their hydration levels, the researchers looked at the levels of sodium in the participants’ blood, also known as serum sodium, which increases as a person’s fluid levels decrease. The normal range for serum sodium is 135 to 146 millimoles per liter (mmol/L), although values at the higher end of this range would trigger a person’s body to start to conserve water, study lead author Natalia Dmitrieva, a researcher in the Laboratory of Cardiovascular Regenerative Medicine at the National Heart, Lung, and Blood Institute (NHLBI), told Live Science in an email. .

The researchers found that people with serum sodium levels on the high end of the normal range — above 143 mmol/L — had a 39% increased risk of developing heart failure over the intervening 25 years, compared with those who had lower serum sodium levels. Heart failure is a condition in which the heart muscle can’t pump enough blood to meet the body’s normal demands.

The study, which was published Tuesday (March 29) in the European Heart Journal, also found that for each 1 mmol/L increase in a person’s serum sodium level within the normal range, the chances of developing heart failure increased by 5%.

The new findings held even after the researchers took into account factors that could affect people’s risk of heart failure, including their age, sex, body mass index, cholesterol levels, smoking status, high blood pressure and whether participants’ typically added salt to their food. Participants were excluded from the study if they had diabetes, obesity or heart failure at the start of the study.

Still, the study only found an association between higher serum sodium levels and heart failure; a randomized controlled trial, in which people are randomly assigned to drink more water, is needed to confirm the findings, the study authors said.

Dr. Ragavendra Baliga, a professor of internal medicine and cardiology at The Ohio State University Wexner Medical Center, who was not involved with the study, told Live Science that the findings are “intriguing” and suggest that, in this select group of people, “hydrating these patients may prevent heart failure down the road.”

Still, the findings don’t apply to everyone since the study excluded people with diabetes, obesity and heart failure, Baliga said.

And he noted that people’s hydration needs can vary depending on a number of factors, including exercise level, underlying medical conditions and medications. For example, people who already have heart failure may be asked to limit their fluid intake to 8.5 cups (2 liters) per day, because heart failure can lead to fluid buildup in the body. And people who take diuretic medications, which help remove salt and water from the body, wouldn’t be asked to drink more because that would be “like pushing the gas and brake at the same time,” Baliga said.

Baliga said that if people’s serum sodium level is on the higher side, they may want to speak with their doctor about whether “they’re good candidates for keeping themselves well hydrated.”

—How much salt do you need to survive?

—Do other animals get heart attacks?

—What is a normal heart rate?

It’s not clear why suboptimal hydration may increase heart failure risk, but when a person drinks less water, their body releases a chemical called antidiuretic hormone (ADH), which tells the kidneys to conserve water, and produce a lower volume of more concentrated urine, Dmitrieva said. At the same time, the body activates  the renin-angiotensin-aldosterone system, which can contribute to high blood pressure, which “is a major cardiovascular risk factor,” Dmitrieva said.

The findings also agree with previous research by the group, in which mice that had their water access mildly restricted throughout life had a greater risk of developing a hardening of the heart muscle known as cardiac fibrosis, which is associated with heart failure.

People can reduce their risk of developing heart failure by adopting a healthy lifestyle, including eating healthy foods, not smoking, maintaining a healthy weight and controlling conditions that raise the risk of heart failure, such as high blood pressure, according to the Mayo Clinic.

Rachael has been with Live Science since 2010. She has a master’s degree in journalism from New York University’s Science, Health and Environmental Reporting Program. She also holds a B.S. in molecular biology and an M.S. in biology from the University of California, San Diego. Her work has appeared in Scienceline, The Washington Post and Scientific American.