Study finds difference in intestinal flora for babies born naturally vs. those delivered by C-section 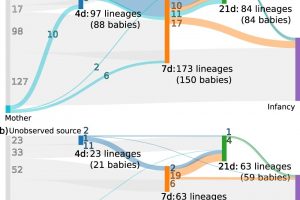 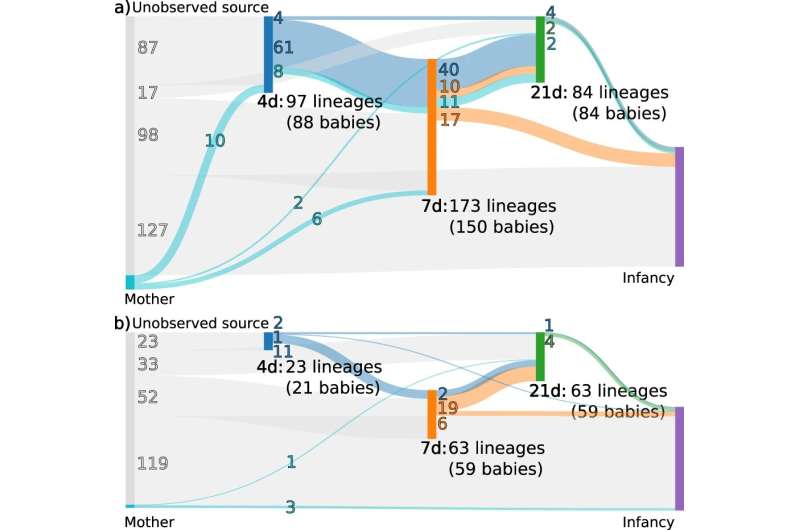 Imagine a horse race, where the winner takes it all and is awarded both food and protection against enemies. In the same way, bacteria compete with one another in the gut of newborn babies.

“The aim of many bacteria is to be the first to get into the gut of newborns and then prevent competing bacteria from entering. And each species of bacteria comes in the form of many different genetic variants. Some of the variants can be easily treated with antibiotics, while other, more malicious ones manage to resist them. Some of these can give the babies infections that are difficult to treat,” says researcher and professor Jukka Corander at the Department of Biostatistics at the University of Oslo.

A study carried out by The Sanger Institute in England has shown that there is a big difference between the intestinal flora present in a baby born in the natural way compared to the flora in a baby delivered by cesarean-section birth (C-section). If a baby is exposed to the mother’s intestinal flora, this will probably protect the newborn against more malicious kinds of bacteria.

No hospital bacteria found in any of the birth groups

How does the method of birth affect whether undesirable variants of different bacteria end up in the gut of babies?

“We studied several types of bacteria, including Klebsiella pneumoniae and Enterococcus faecalis. Variants of these bacteria that are resistant to antibiotics have spread to hospitals all over the world. We wanted to know if babies delivered by cesarean-section were more often infected by these hospital bacteria,” explains Corander.

Fortunately, they did not find hospital bacteria among babies delivered by cesarean-section, nor by vaginal delivery.

“This is good news, because otherwise, the babies would be at risk of getting infections that are difficult to treat,” continues Corander.

Their findings were recently published in Nature Communications.

Professor Corander’s research team have developed a completely new way of detecting relatively quickly which genetic variant of a bacteria is present in a sample. Up until now, it has only been possible to find out approximately which type it is.

The researchers devised the new detection method by creating a large library of samples that new samples can be compared against. In addition, they have set up a new statistical model and algorithm that allow them to handle millions of DNA strands not only rapidly, but with higher precision than before.

The research team also studied the bacterium E. coli, which can cause blood poisoning. What is the probability of a certain variant of E. coli winning the battle for dominance in the intestines? Corander found three variants that can result in a higher risk of infection.

“We found many different variants of E. coli in the babies. But we also discovered that the variant that won the race to enter the gut, seemed to be able to prevent the other variants from invading for several weeks,” explains the professor.