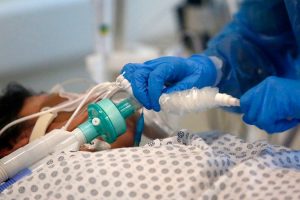 The effects of long COVID can last a long time, especially for women, a new study says.

Women were 33% less likely than men to make a full recovery, according to the study. Also being less likely to recover were obese people and those who’d been on mechanical ventilation.

Researchers in the United Kingdom examined 2,320 people who were diagnosed with COVID-19 and discharged from hospitals between March 7, 2020, and April 18, 2021. Researchers checked back with study participants five months and one year after discharge, though the number of participating patients dropped after five months.

Researchers say they don’t know the reason for the long-lasting symptoms. A hypothesis is that hyperinflammation in acute COVID leads to “a persistent inflammatory state” following COVID-19.

“Our study highlights an urgent need for health-care services to support this large and rapidly increasing patient population in whom a substantial burden of symptoms exists, including reduced exercise capacity and large decrements in health-related quality of life 1 year after hospital discharge. Without effective treatments, long COVID could become a highly prevalent new long-term condition,” said study co-leader Christopher Brightling of the University of Leicester.

A different study, published in late March in the Journal of Women’s Health, found that women with long COVID were more likely than men to report symptoms both during the acute phase of the disease and five months afterwards.

Researchers examined 89 female and 134 male patients diagnosed with COVID-19. Women were more likely than men to experience symptoms such as difficulty swallowing, fatigue, chest pain, and palpitations, the study said.

“We demonstrated that (females) were more symptomatic than (males) not only in the acute phase but also at follow-up. Sex was found to be an important determinant of Long-COVID-19 syndrome because it is a significant predictor of persistent symptoms in (females) such as dyspnea, fatigue, chest pain, and palpitations. Our results suggest the need for long-term follow-up of these patients from a sex perspective to implement early preventive and personalized therapeutic strategies,” the study concluded.