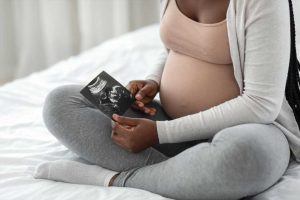 Previous studies have reported that maternal SARS-CoV-2 infections and immunological responses elevate the risk of altered fetal brain development, fetal death, growth restrictions and severe pathologies such as intraventricular hemorrhages and pneumonia. SARS-CoV-2 can reportedly infect developing human neurons within cerebral organoids. However, contrasting findings of greater SARS-CoV-2 presence in the choroid plexus of the organoids have also been reported.

In the present study, researchers assessed the effects of coronavirus disease 2019 (COVID-19) on fetal brain tissues.

The study was conducted between July 2020 and mid-April 2022 in the United Kingdom (UK), wherein human fetal tissues aged 9.0 to 21.0 pcw (post-conception weeks) were obtained from the HDBR (human development biology resource). In addition, lung specimens were obtained from SARS-CoV-2-positive individuals. Immunofluorescence and immunohistochemistry analyses were performed, and the immunostained sections were analyzed using confocal microscopy.

Further, ISH (in situ hybridization) analysis was performed using SARS-CoV-2 ribonucleic acid (RNA). Hemorrhages were quantified based on the number and size of erythrocyte clusters in the tissues. The team examined the number of hemorrhagic specimens associated with SARS-CoV-2 infection cases based on data sourced from the https://coronavirus.data.gov.uk/ website.

To assess the chronicity of hemorrhages, the presence of ferric iron deposits that arise post-RBC lysis was examined with Prussian Blue staining. Next, the team examined the counts of cleaved caspase-3+ cells to determine whether the older or recent hemorrhages were related to increased cell deaths within cortical tissues. Furthermore, SARS-CoV-2 spike (S) protein expression was investigated in cells of the placenta, amnion, and umbilical cord.

Compilation of the top interviews, articles, and news in the last year.
Download a free copy

Among 26 hemorrhagic specimens examined, 25 no-abnormality specimens were obtained from elective terminations and one specimen had trisomy 21. SARS-CoV-2 presence was detected in the initial- and subsequent-trimester fetal brain associated with hemorrhage in the cortex. SARS-CoV-2 spike (S) expression was sparse in cortical microtubule-associated protein 2 (MAP2)-positive and HuC/D-positive neurons and the nestin-positive and Hopx (homeodomain-only protein)-positive radial glial, and Sox2 (sex-determining region Y-box 2)-positive ventricular zone and subventricular zone progenitor cells.

On the contrary, SARS-CoV-2 S was abundantly present within the choroid plexus of the cortical hemorrhage specimens.  In addition, SARS-CoV-2 was present sparsely in the placental, umbilical cord and amniotic tissues, indicating SARS-CoV-2 presence in maternal and fetal tissues. Cortical hemorrhages were associated with reduced integrity of blood vasculature and increased immunological cell infiltration in the fetal brain.

The mean values of surface areas in the RBC clusters were 0.02 mm2 and 0.05 mm2 among non-hemorrhagic and hemorrhagic specimens, respectively, with the biggest cluster having a surface area of 1.3 mm2. In the cortical regions of the hemorrhagic specimens, blood vessels situated proximal to erythrocyte clusters showed significantly lower claudin-5 expression compared to away from vessels located far from the erythrocyte clusters.

Dr. based clinical-radiological diagnosis and management of oral lesions and conditions and associated maxillofacial disorders.