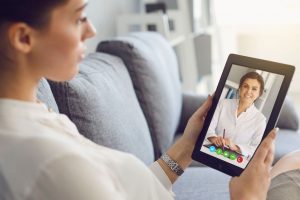 A teletherapy program reduced symptoms of obsessive-compulsive disorder, and most patients maintained improvements up to a year later, according to a study published in JMIR.

The study’s authors were employed by NOCD or reported they had received payments from NOCD while conducting the study.

“The effect size was large and similar to studies of in-person ERP. This technology-assisted remote treatment is readily accessible for patients, offering an advancement in the field in the dissemination of effective evidence-based care for OCD,” researchers wrote.

The study’s authors noted the virtual intervention took about 12 weeks and fewer than 11 therapist hours.

“Technology assistance likely played an important role in this treatment’s ability to both engage and treat a large number of patients in wide-ranging geographic locations and to achieve a high mean rate of symptom improvement and a high rate of treatment response,” they wrote.

“Teletherapy using video allows people in remote locations to access treatment and to be able to complete, in-session, in vivo exercises in places and situations that are most relevant to, or triggering of, their symptoms.”

NOCD announced it had raised $33 million in Series B funding in September last year. That brought its total financing to $50 million, according to Crunchbase.