Tea and wine could help stave off dementia – study 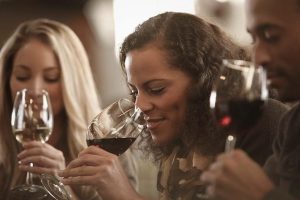 Dementia describes a cluster of symptoms associated with an ongoing decline of brain functioning. Contrary to popular opinion, it is not a direct result of ageing, it’s triggered by a number of different diseases instead, with Alzheimer’s disease being the most prevalent. Fortunately, your diet could help erect a barrier against the mind-robbing condition. New research suggests that Britain’s favourites are up for the job.

Characterised by its pleasant taste, black tea softened with milk is the go-to comfort drink for millions of Britons. And wine is without a doubt another nation’s favourite.

Research, published in the journal of Neurology, makes a compelling case for adding these drinks to your menu.

The study suggests that something as simple as drinking could help stave off dementia.

The reason why these completely different drinks can curb the mind-robbing condition comes down to their antioxidant content.

READ MORE: Acholic stools are ‘the most common’ sign of pancreatic cancer in ‘initial’ stages

People who get more antioxidant flavonols from their diet may have a slower rate of memory decline, the researchers penned.

In case you aren’t aware, flavonols describe a type of flavonoid, a group of phytochemicals found in plant pigments celebrated for their beneficial effects on health.

What’s more, you can still reap the brain protecting benefits even if you don’t like wine and tea.

“Something as simple as eating more fruits and vegetables and drinking more tea is an easy way for people to take an active role in maintaining their brain health.”

The researchers arrived at these findings by looking at 961 people with an average age of 81 without dementia.

The study participants had to fill out a questionnaire each year detailing how often they ate certain foods and complete cognitive and memory tests including recalling lists of words, remembering numbers and putting them in the correct order.

They were then divided into five groups based on the amount of flavonols they consumed.

On average, the participants ate a total of approximately 10 milligrams (mg) of flavonols per day.

The lowest group had an intake of about 5 mg per day, while the highest group consumed an average of 15 mg per day – which is the equivalent of about one cup of dark leafy greens.

The study also broke down the flavonol classes into four constituents – kaempferol, quercetin, myricetin and isorhamnetin – with the first one promising the slowest rate of cognitive decline.

Foods that are rich in this flavonol include kale, beans, tea, spinach and broccoli. This was followed by myricetin found in the likes of tea, wine, kale, oranges and tomatoes.

Holland added that the research merely shows a link between higher amounts of dietary flavonols and slower cognitive decline but does not prove that flavonols are the direct cause.

Other limitations of the study included the self-reported nature of the food frequency questionnaire, which suggests that some people may not accurately remember what they ate.