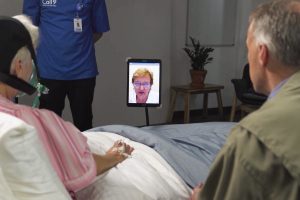 The skilled nursing sector has undergone a major transition over the past ten years. Because of shifting demographics and the challenges they place on hospitals, skilled nursing facilities are receiving patients who are struggling with more significant health concerns than in the past. As such, there is a need to provide a greater range of care in the facility.

The Friedwald Center, a 180-bed skilled nursing facility in New York City, wanted to bring in telemedicine to give its patients more immediate access to quality clinicians that are very understanding of acute care and acute situations.

“Many studies have shown that having readily available access to higher skilled clinicians directly results in better outcomes in patients’ diagnoses, whether it be acute or chronic,” said Michael Feist, vice president of operations at the Friedwald Center.

“Generally, a nursing home doctor or medical director is a family practitioner who is extremely proficient in nursing home rules,” he added. “That’s a long way from emergency medicine; it’s a different ballgame.”

To have that diversity of skill is incredibly useful in the skilled nursing facility setting, and to give another resource to the facility – especially to the nurses who deal with these situations on a first-hand basis – is invaluable, he added.

“Anything we can do to make our staff in the building feel more comfortable,” he said. “Telemedicine creates an opportunity for us to have access to highly skilled clinicians without the overhead we’d absorb if we had to pay all of their salaries.”

As the shift to value-based care continues to take hold, the industry is moving toward reducing avoidable rehospitalizations.

“We want to be in front of the curve – not simply to be talked about for our initiatives, but to actually be bringing the best and the most innovative initiatives to help reduce rehospitalizations,” Feist said. And it’s just better for the patient as well; sending them back to the hospital for ailments that a telemedicine team, in partnership with facility staff, can treat at the residents’ bedsides is not good, he added.

“Every metric tells us that it obviously wastes money, which is what Medicare cares about, but more so it puts the patient at risk of other types of hospital-borne illnesses,” he said. “It’s a win-win. Keep them in our building, keep their progression in a straight path and keep costs down. Any time all of those motivations align, then we’re all in.”

So the Friedwald Center started working with telemedicine vendor Call9 in March 2018. Under the Call9 model, Call9 embeds emergency-trained staff – generally an EMT or paramedic, which they call a clinical care specialist – onsite in the facility.

The telemedicine team is available 24 hours a day, 7 days a week, 365 days a year. As residents get sicker, facility staff will “activate” the clinical care specialist, who goes to the bedside and uses Call9’s proprietary technology to immediately connect to their remote emergency medicine physician and advanced practice provider care team via their technology platform.

“The clinical care specialist also brings to the bedside a diagnostic cart that is loaded with equipment we don’t typically have access to in the facility, such as bedside ultrasound, 12-lead EKGs, telemetry, pacing, vital signs, electronic stethoscope for heart and lung sounds, urinalysis and on-site point-of-care blood work in less than two minutes,” Feist explained.

“The clinical care specialist puts in all of this information into their system, and the Call9 provider has access to it from their remote location,” he said.

Overall, telemedicine has been a great experience for the center and a big value-add for patients, he added. Staff is able to work with the telemedicine team to deliver premium care to residents and let them stay in the facility – which for many patients is their home – as opposed to going to the hospital, he said.

Having telemedicine in the center has been tremendous in giving nurses confidence and in making them feel even more comfortable, Feist said. It’s also a teaching tool because they’re there when decisions are being made.

“A lot of times in the past, the patients we’re not able to deal with in-house would go to the emergency room,” he said. “The second the paramedics come to the building, they take over care. That patient disappears, you find out about them later in the evening or the next day, or you read a report somewhere, but you’re not there after that.”

Now, nurses are able to be there for that acute intervention. They’re able to see what decision making goes on during that vital time in which the patient is being clinically treated and interventions are being made.

“We want to be in front of the curve – not simply to be talked about for our initiatives, but to actually be bringing the best and the most innovative initiatives to help reduce rehospitalizations.”

“That’s something that they weren’t necessarily a part of before,” Feist said. “So not only does it educate and give the nurses a level of comfort that they’re not used to – particularly in the middle of the night when they’re alone on a floor or unit with very challenging, acute patients – it gives them that extra level of support.”

The nurses are skilled in chronic care, and they handle that level of care extremely well; but when the need comes to take it to the next level, and one cannot really prepare oneself for it, now they have somebody at their side, he added.

The center also has a full inpatient/outpatient dialysis unit and a ventilator floor staffed around the clock with respiratory therapists, where it is servicing the most sick of the community. This population requires all sorts of advanced interventions; they’re not simply a conventional nursing home long-term resident.

“We’re really set up almost like a step-down subacute center in a nursing home,” Feist explained. “Obviously that’s the transition healthcare is moving toward. Call9 is helping us more confidently care for this patient group, knowing we are always minutes away from a real physician when acute moments arise, regardless of the time of day or night.”

For these patients in particular, decisions need to happen more quickly than other residents who might have a stable homeostasis other than their admitting diagnosis. The decision-making time is generally cut in half if not less because it’s vitally important for them to stay in a proper balance.

“That we can use Call9 and all of its diagnostic capabilities makes the decision making faster and more accurate,” he said.

Three particular areas in which telemedicine has had success at the Friedwald Center in avoiding hospital transfers include falls, dementia and degenerative diseases of the nervous system (which includes Alzheimer’s).

“For falls specifically, the CDC reports that one out of five falls causes a serious injury such as broken bones or a head injury,” Feist said. “Each year, 3 million older people are treated in emergency departments for fall injuries. Over 800,000 patients a year are hospitalized because of a fall injury, most often because of a head injury or hip fracture.”

When it comes to falls, having the ability to do a thorough assessment is critical, especially if the head was involved, where one is worried about potential respiratory or neurological impact from an acute standpoint.

“We’d always do the basic testing, but we don’t have the capacity in the building to do the full range of tests,” Feist noted. “Now we’re able to defer that to Call9 to do these necessary, reasonable tests that really serve as a double check to make sure that we didn’t overlook anything. A nursing baseline falls assessment isn’t as comprehensive as what you can do with all of the gadgets and clinical apparatuses on the Call9 cart and with the actual skilled physician evaluating.”

When it comes to other neurologic conditions and dementia patients, having telemedicine is beneficial for family members, particularly for instances when patients have deficits or lack the ability to communicate.

“Family feel very comfortable because telemedicine enables them to really see how their loved ones are doing through concrete signs and symptoms and via the diagnostic equipment,” Fest said. “Generally it’s very hard to assess holistically how a patient is doing without being able to verbally ask them subjective questions and compile a full workup.”

So it’s really necessary to have a highly skilled clinician at one’s fingertips, in addition to the advanced diagnostics, to be able to get information out of them when patients are unable to share it verbally, he added.

“Now is the time; actually, now is past the time,” Feist advised. “This is something we really needed to be doing a long time ago – but it’s nice that it’s here now. The great thing about this equipment and technology is that it’s very user-friendly.”

Because Call9 provides the onsite staff, adoption of this technology is easier than other interventions, he added.

“I’ve made many attempts to bring in other types of technology that have been less successful, not because of the actual technology but in how it’s affected the normal processes our staff have developed and been used to for more than 30 years.”

Prepare staff to break the mold of what they’re used to, he stated.

“An all-encompassing service like this where you’re getting both the technology and the person along with it to make sure it’s being used properly is ideal,” he concluded.