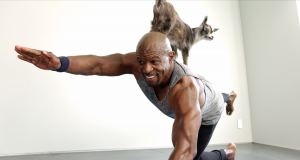 Terry Crews doesn’t start his day until his workout is done. We’re not ones to interfere with a man and his morning sweat, so we decided to interview Terry during his workout. Except we also decided on the workout—one Terry’s never done before, but one we were sure he’d find equal parts challenging and … cute?

Cut to: Terry in a plank position, bracing for added weight in the form of a small goat leaping onto his back.

“It FEELS cute!” says Terry, as the goat settles and sits on his lower back, to many “oohs” and “awws” of our production team.

Terry’s successfully doing “goat yoga,” perhaps the most self-explanatory yoga practice around. The OG goat yoga practice began in Oregon in 2016 at a birthday party. Lainey Morse had been divorced and diagnosed with an autoimmune disease, after which she began spending more time with the goats on the farm.

Interaction with animals can promote the release of chemicals like serotonin and can help lower anxiety.

The goats helped provide comfort, an effect that has been well-documented through animal-assisted therapy research. Interaction with animals can promote the release of chemicals like serotonin and can help lower anxiety. Animal therapy can also lower blood pressure and improve cardiovascular health.

Morse began inviting her friends to these goat gatherings. One of those friends, a yoga instructor, suggested having yoga sessions out in the fields—with the goats running around. If yoga lowers stress and goats lower stress, then goat yoga must be the ultimate stress-buster.

The goats jumping onto Terry’s back are Nigerian Dwarf goats, which means when they jump on, they’re only adding about 30-40 pounds. But that’s 30-40 moving pounds of goat, hopping on and off your back while you’re in child, downward dog, and balancing table. Not an easy activity.

We asked Terry some serious fitness questions while the goats roamed about, including best exercises for a strong back, how often he trains his arms, the secret to benching more weight, and whether he prefers squats or deadlifts.

“I have to say . . .” [goat walks over Terry’s should ] … “In my opinion” [goat hops down and circles around to graze under Terry’s face] … “It would really have to be…” [goat looks around and saunters off].

Wait, what was Terry saying? Deadlifts. Were we talking about deadlifts?