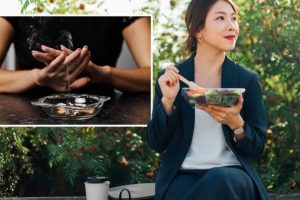 Parkinson's disease: The signs and symptoms

Research into the modifiable risk factors have turned up a surprising finding.

According to an article published in the journal The Lancet, being a non-smoker “doubles the risk” of Parkinson’s disease.

This association was highlighted in a study published in the International Journal of Epidemiology.

According to the population-based study, smoking more cigarettes or for a longer time is associated with a decreased risk of developing Parkinson’s.

A reduced risk was also seen in people exposed to passive smoking compared with those who had never smoked.

However, the scientists cautioned that rather than encouraging people to smoke, the findings warrant further research into which compound in tobacco confers this effect.

To gather their findings, researchers from Queen Mary University of London, Imperial College London and University of Campania Luigi Vanvitelli, in Italy, analysed the link between Parkinson’s risk and smoking duration, amount and time since quitting smoking.

They looked at a potential delaying effect, smoking patterns among current and former smokers, the association with passive smoking, and the consistency across clinical subtypes.

Data on smoking habits were collected at recruitment, including whether participants were never, former or current smokers, their age when they started smoking and when they quit, and number of cigarettes per day at different ages.

The results showed that, compared with people who had never smoked, former smokers had a 20 percent lower risk and current smokers a halved risk for developing Parkinson’s during follow-up (12.8 years).

Smoking more cigarettes and for a longer period of time were also associated with a lower risk of developing the disease, as the risk in people smoking 12 or more cigarettes a day or for longer than 30 years was about 55 percent lower compared to those who had never smoked.

Also, the risk did not vary over the follow-up period, which argues against a delaying effect of smoking on Parkinson’s onset, the team observed.

Exposure to passive smoking at home or work was also linked to lower risk, as passive smokers were 30 percent less likely to develop the disease than non-exposed individuals.

“In conclusion, the present findings are consistent with a protective effect of smoking on the risk of [Parkinson’s],” the scientists wrote.

“Our discovery is incredibly important from a scientific point of view and should prompt basic science research aimed at identifying the agent responsible for this effect found in tobacco,” Valentina Gallo, MD, PhD. the study’s first author, said in a press release.

“Hopefully this will give insight for preventive treatment options.”

Gallo added: “However, no one would ever be advised to use smoking as a preventive treatment for Parkinson’s based on this research, because of the disastrous effects we know smoking has on people’s general health.”