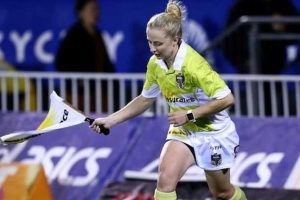 In a move 111 years in the making, the NRL have announced that former Courier Mail sub-editor Belinda Sharpe will become the first ever female top flight referee to officiate a match.

The 31-year-old will make her professional debut at Suncorp Stadium on Thursday night, for the clash against the Broncos and Bulldogs.

“I just loved rugby league growing up and I played touch football, ended up refereeing touch footy and made the transition from there,” the Queenslander told NRL.com. “The game has been my passion and now I’ve turned that into a full-time career.”

Over the past 13 years, Belinda has worked as a referee at every level of the game, from the NRL as a touch judge to the Queensland Cup and Women’s State of Origin. She also handled the international fixtures in the women’s rugby league and four Tests during the men’s 2017 World Cup. Never before though has an on-field match referee been a woman – a role Belinda describes as “high pressure.” Still, she believes her gender is irrelevant to her performance.

“At the end of the day they just want a referee who is capable of doing their job and it doesn’t necessarily matter who they are, or whether they’re male or female. They just want you to do a good job,” she told the publication. “That hasn’t changed over the years in any grade I’ve been involved in. Once you demonstrate you’re competent in that role, that’s all that matters.”

“The players are used to seeing me out there since I’ve been doing it for a few years now so they don’t treat me any differently.”

Belinda’s appointment comes just a week after NRL’s head of football, Graham Annesley, expressed his concern over the lack of depth in the refereeing ranks.

“This is a historic moment for the game and I’m so happy for Belinda,” he said.

“She has worked extremely hard, served her apprenticeship, and earned her elevation on merit.

END_OF_DOCUMENT_TOKEN_TO_BE_REPLACED

END_OF_DOCUMENT_TOKEN_TO_BE_REPLACED
We and our partners use cookies on this site to improve our service, perform analytics, personalize advertising, measure advertising performance, and remember website preferences.Ok