The Program That Helped This Aussie Woman Lose More Than 47kgs 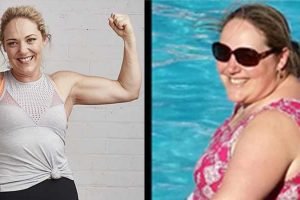 What prompted you to start your fitness journey, was there a particular moment or realisation?

I’d struggled with my weight my whole life. In 2015, it came to a head. I weighed 110kg and it was having an impact on everything in my life – my confidence, my mood. I was tired all the time and generally unhappy.

My sister Jules had come to visit me in Australia from the UK and she could see how unhappy I was. Her words were my wakeup call. The day before she left she said: ‘Go back to WW because you know it works. I know you can do it because you’ve done it before – you owe it to yourself.’ She also advised I get a personal trainer to kick-start my journey.

I took it on board and hired personal trainer. But a neck injury, the Christmas break and a bout of whooping cough set me back. Then, in April 2016, my friend took a photo of me and I hated what I saw. That week I told my doctor how unhappy I was with my weight and he referred me to a weight-management clinic to talk about surgery. That’s when I said, ‘Enough is enough.’ I joined WW and this time I was ready to commit.

What was the first change you made to your lifestyle?

After re-joining WW, one the first healthy changes I made was attending weekly workshops. I was surrounded by supportive people like my coach and the other WW members going on similar journeys which kept me motivated. I also opted to participate in weekly weigh-ins because it kept me accountable.

What other changes did you initially make to your eating habits?

Tracking my food in the WW app was very important, especially in the early stages, to understand what and when I was eating and also to learn which foods were better for me. There’s a barcode scanner in the app which is probably the best thing ever invented! It really helped in the supermarket to understand the SmartPoints value of a food.

I was also encouraged to eat healthier, unprocessed foods. On WW, there are more than 200 ZeroPoint foods, including things like chicken breast, seafood, fruit and vegetables that you don’t have to measure or track. So, I started building my meals around these while still allowing myself to eat smaller portions of foods higher in SmartPoints. I also found that exercise stopped me wanting unhealthy food.

What other changes did you initially make to your exercise habits?

It took me six months to commit to a personal trainer. It was just after Easter, and after discussing the temptation of chocolate, I’ll never forget him saying: ‘Right then, we need to make you sweat.’ At 110kg, I wanted to die! He introduced me to the treadmill, exercise bike and rowing machine, spending 5 minutes on each. We repeated this at least three times a week, introducing other machines as I progressed.

He advised I get myself some headphones and a motivational playlist – which helped dramatically! I even took myself off social media for a few weeks to really focus on myself.

After losing an initial 10kg, I got a call out to return to England as my mum was very sick. In that moment on the plane, I told myself, ‘This is going to go one of two ways: either you’ll go back to your old coping mechanism of eating because you’re stressed, or you’ll turn this around.’ Normally I would have indulged on the cakes, biscuits and alcohol on the flight. I used to think, ‘It’s free!’ but then I realised, it’s not free. I’m just setting myself on the path to destruction. Instead, I practised a new healthy habit – I spent an hour and a half walking up and down the steps on the Airbus A380. In the early stages, it was all about making small changes to move more whenever I could.

How did your weight loss/fitness progress?

My WW Coach continued to coach me through the WW app while I was overseas. One of the WW members had also given me the idea to complete the couch to 5km just a week or two before I left. So, with the app downloaded, I saw it as a sign. I started to run with my mum’s dog, Ninnie, every day! She taught me to run! Over the couple of months I was in the UK, I lost about another 15 kilos. When I returned to Australia, everyone noticed I was significantly lighter, which made me feel really good. Everyone around me was so delighted – my husband, my family, my WW Coach. With this boost, I was motivated to increase my exercise and found the confidence to start kickboxing!

I fell in love with it! It was a great stress release and really empowered me. I knew I would never be in the ring but it was so much fun and did wonders for my confidence. With running and kickboxing under my belt, I even a joined fitness classes which had always been a hurdle for me. I used to HATE exercise and now exercise and fitness were becoming an important part of my life – something that I enjoyed! Something that made feel good!

What changes made the most difference?

Variety made a big difference when it came to exercise. I included both cardio and strengthening exercises in my regular routine. The type of food I ate was also extremely important in giving me the energy to exercise, so ensuring I was eating a good balance of carbohydrates, protein and vegetables.

How did you feel during the process?

I felt amazing! I had more energy and my confidence grew. I’d never ever had muscles before! I now have an appreciation for muscles and what it takes to get them. I love being strong! It feels so good to be fit.

What helped to keep you motivated?

Once I found my pace and was in the process, it was much easier to stay motivated. Finding motivation in the first place was the challenging part. That’s where WW’s community helped, and my personal trainer in the early stages.

I have realised that is a journey and you need to surround yourself with the right people. That support group might change over time, which is OK. I have a gym buddy who has helped me along the way, who has been a constant in this process, as well as my WW Coach.  Most importantly, though, you must have self-belief because the one person in my life who has enabled this change is me.

I have also learned that it is important to find a balance. I was fiercely determined to reach my goal, but balance is what has enabled me to maintain my healthy weight and lifestyle for two and a half years.

Do you have any favourite motivational quotes?

Have faith in your dreams and someday your rainbow will come smiling through.

Believe in yourself, be determined and know you can do it!

What are your current short and long-term goals?

My long-term goals are to maintain my weight between 62-66 kg. I do this through attending my WW workshops and fitness classes. I also aim to focus on a more holistic approach to wellbeing incorporating mediation and yoga.

In the short-term, I’m interested in doing more fun runs and perhaps even a triathlon!

What would a day on a plate look like for you now?

I also sometimes have a glass of wine at the end of the week.

What is your current exercise routine?

– I also do yoga twice per week

What achievement are you most proud of?

What advice would you give to others wanting to do the same?

Believe in yourself, surround yourself with the right people, and know that your support network will evolve along the journey!

For me, WW and my exercise classes have provided the support and motivation to keep me going. I was worth it! So are you!