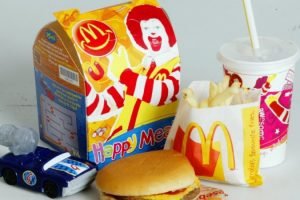 Most parents know fast food restaurants are not a healthy choice. However, what many may not know is that some children’s meals contain more than an entire day’s recommended salt intake, and most contain nearly half of this.

Salt levels in Australian fast food meals are as much as double those in the UK, a new report by The George Institute for Global Health, VicHealth and the Heart Foundation has found. 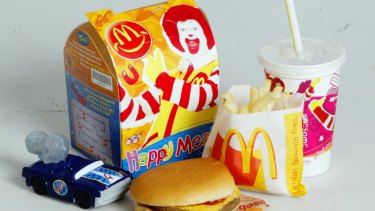 The Happy Meal was one of the worst offenders containing two thirds of a day’s worth of salt for a child.

The research examined the salt in 66 items on the children's menus at Hungry Jacks, KFC, McDonald’s and Subway.

The saltiest meal on the menu was the Hungry Jacks six chicken nugget pack which contained 108 per cent of a four- to eight-year-old child’s recommended daily salt intake.

Across all four fast food outlet menus, the average salt content of children’s meals was 45 per cent of a child’s recommended daily salt intake.

“It’s pretty staggering,” says Clare Farrand, public health nutritionist at the George Institute and the report’s lead author. “It’s a significant amount of salt you are adding to the diet.”

Farrand warns children are eating double the amount of salt they need.

“Four to eight-year-olds need less than 3.5 grams of salt per day – that’s about half a level teaspoon. Research suggests they are eating about six grams a day.”

Most of the salt we consume is already added to the foods we buy and often doesn’t taste overly salty because it is balanced out with high levels of sugar and fat, Farrand explains. This is how 80 per cent of Australian children are unwittingly eating too much salt, acquiring a lifelong taste that is putting them at risk of high blood pressure, strokes and heart attacks later in life. 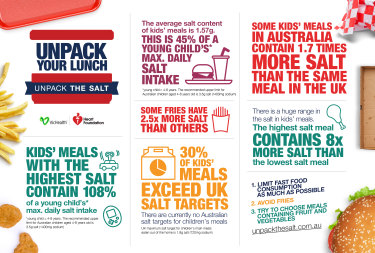 An infographic released by the Heart Foundation and VicHealth.

“But children are not born with a preference for salt. It’s a learned preference,” Farrand explains. “If we can get children to eat less salt to begin with perhaps they wouldn’t develop that preference.”

Some of the same meals in UK outlets contained about half the amount of salt, which may be the result of the successful UK salt reduction programme, and which shows it is possible for manufacturers to make them with less salt.

“What our study really unveils is [these meals] don’t need to contain these salts,” Farrand says.

The government is looking at “reformulation targets” for processed foods and the groups behind the report are calling on the fast food industry to reduce the amount of salt in their meals.

In the meantime, Farrand says it’s up to parents to choose.

The attraction to fast foods, Farrand says, is that they are cheap and easily accessible. “It’s an easy go-to,” she says.

“For parents, do make sure it’s an occasional thing and when you’re faced with billboards and meal deals, it’s easy to be upsold. Stick to small portion sizes and stick to the vegie options instead of the fries where possible,” Farrand urges. “We want you to have the information to make healthier choices."

Click here to try the free Unpack The Salt 10 Day Salt Challenge, run by the Heart Foundation and Vic Health.