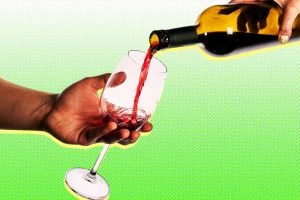 If you were to guess which age group is drinking too much these days, there’s a good chance teenagers would be the first to come to mind. But new research has found that 33% of 35- to 44-year-old U.S. adults are throwing back one too many, to the point that would cause an addiction specialist to consider intervention. A poll conducted by the American Osteopathic Association by The Harris Poll discovered a rise in daily drinking and binge-drinking in that age group, and that demographic hasn’t been associated with excessive drinking in the past. Malissa Barbosa, DO, wasn’t surprised by these findings, since they line up with what she is seeing in her practice. “It’s not a topic we discuss enough,” she says. Barbosa breaks down the details behind Gen Xers and older Millennials drinking too much.

“Number one is the accessibility,” Barbosa says. “You have that unspoken permission, which leads to the fact that it’s normalized in society—you see it in movies, ads, and everything celebratory involves drinking. Every sporting event or show has alcohol available. Because it’s so pervasive, it’s hard for people to understand the dangers.”

Of course, there are several other factors driving the trend. Barbosa points out that alcohol is also frequently used as a coping mechanism. “Adults have a lot of stressors in that time frame,” she says. Who hasn’t felt the urge to crack open a beer or have a glass of wine after a tough day at work?

Another issue is the lack of education around drinking, particularly for Gen Xers and older Millennials. Barbosa points out that they came of during the crack and cocaine epidemics, so that would have been the focus of their anti-drug abuse education in school. “No one dealt with the taboo subject of alcohol because it is legal,” she says. “Now that we are taking a more critical eye at substances, the conversation still needs to circle back to alcoholism, and the problem starts very early. Not only parents, but young people need to be aware of the dangers.”

How much alcohol is too much?

A healthy amount of alcohol is no more than five drinks in a week for men and four for women, spread out at one per night. Anything more than that can be hard to determine exactly when someone has a drinking problem. People tend to think that if they’re not an alcoholic then they’re managing drinking just fine, but that’s not actually the case.

“As they get older, they don’t think about it as binge drinking if they’re going out sociably and having five or six drinks in the evening,” Barbosa says. “At the end of the night, they’ve had a lot to drink, but it’s not seen as binge drinking. They think, ‘I’m just having a good time on the town, how could it hurt?’ It’s a point of education at this point as well. You have to look at the functionality. How is their life being affected? A lot of individuals are very functional in dysfunction. That doesn’t mean they’re okay.” When you notice that someone’s drinking is putting themselves at risk, or it starts to impair their performance at work or socially, they have a problem.

What does too much drinking do to your health?

“I call alcohol the insidious drug because it can do so much damage over a period of time,” Barbosa says. “If you suffer from alcoholism, you can die from withdrawals — it’s that serious.”

Too much drinking can take a serious toll on your health, such as harming vital organs like the liver, heart and brain. It also increases the risk of several cancers, including liver, mouth, throat, voice box, esophagus, colon and rectum, and just having a few drinks a week can increase the risk of breast cancer. Plus, depression, bipolar disorder, psychotic disorders and anxiety issues are also associated with drinking. It’s linked to the development of neurological issues, such as nerve pain and movement disorders, as well as cognitive issues, including handicapping memory, attention, problem-solving and more. Of course, drinking too much can also impair your judgement, leading you to make dangerous decisions, which can especially leave women particularly vulnerable.

Thanks to the uptick in drinking in Gen Xers and older Millennials, Barbosa is seeing illnesses caused by drinking, such as cirrhosis of the liver, starting at much younger ages. “When our parents were our age, if they had a friends who was alcoholic, they wouldn’t have cirrhosis of the liver until their 50s or 60s or even 70s,” Barbosa says. “Now we’re starting to see that in their 30s.”

How can you help someone who is struggling with alcohol?

It’s okay to ask if something is going on. “You can’t be too afraid to ask a question — it’s just being a good citizen overall when it comes to family and friends,” Barbosa says. “(Otherwise) you’re complicit, and not being a good neighbor or family member. We need to start looking out for one another when it comes to this issue. Show that it is coming from an empathetic place. Say, ‘I am truly concerned about you because too many things can come as result of being under the influence.’”

Taking the time to find out if someone is struggling can mean the difference between life and death. “This day and age right now is very self-centered and self-focused, and that doesn’t bode well in situations like this,” Barbosa says. Remember there are always resources available, including medical professionals, but it doesn’t have to be a full blown intervention to be effective. “Ultimately, for Gen Xers and Millennials, the take home message is you have to be aware and take responsibility not just for yourself, but for others.”