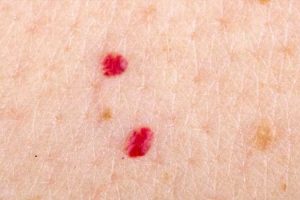 If you’ve ever woken up in the morning, and were perplexed to find that a tiny, mysterious red bump has appeared on your skin overnight, you’re not alone. If you’ve had a little red lump that doesn’t itch, doesn’t hurt, clearly isn’t a bite, injury, or mole randomly pop up on your skin, you likely stared at it for a while, wondering what on earth it could be and where it came from. It’s possible that you’re dealing with a completely benign phenomenon called a cherry angioma.

Speaking with Byrdie, board-certified dermatologist Dr. Jessie Cheung defined cherry angiomas as “small bright red bumps, made up of clusters of blood vessels.” Byrdie further described the growths as “tiny oval or rounded shaped moles,” which usually show up “on the chest, abdomen, back, arms, and legs,” though they can be found elsewhere on the body, too. They are harmless and aren’t painful, though you should avoid the urge to scratch or pick at them in investigation as they can bleed fairly easily. So if they’re random and harmless, why are they showing up?

What causes Cherry Angiomas and when to see a doctor

“We don’t know the exact cause, but there is a genetic factor that makes some people more likely to get them,” another board-certified dermatologist, Hadley King, MD told Byrdie. Hormones and age are both major factors as well. They are more likely to crop up or to change during pregnancy, when on estrogen-increasing medications like birth control, and once a woman reaches her thirties. Dr. Cheung concurred, adding that “estrogen makes the blood vessels dilate,” and with age comes reduced collagen in the skin, which means “superficial blood vessels have less support.”

You likely don’t need to seek treatment for a cherry angioma, although you can have them removed for cosmetic reasons or if they are in a place that is frequently bumped, causing bleeding. However, you should absolutely seek medical attention if you notice the angioma change in appearance, whether in size, shape, or color. This is true of any skin lesion, whether a mole, freckle, birthmark, or any other skin growth (via Healthline).