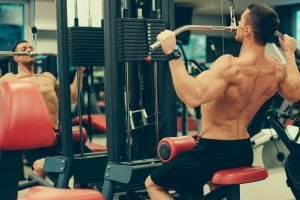 What if there was a super simple way to make your muscles grow faster? Even more intriguing, one that doesn’t involve spending longer in the gym, doing different exercises, or lifting heavier weights.

You won’t need to do more sets or reps than you’re currently doing. Nor will you need to completely overhaul your training program, buy any expensive equipment, or splash the cash on fancy supplements. In fact, you won’t need to spend any money at all, and you can get started in your very next workout. All you need to do is shift the way you focus when you lift—and the growth will follow.

What Is Attentional Focus?

Here’s the story: Back in 2009, a team of US researchers set up a very simple experiment. They rounded up a group of people who had never lifted weights before and got them to do lat pulldowns.

During each rep, the researchers used electrodes to measure muscle activity in the lats. They wanted to find out if it was possible to make the lats work harder with a shift in something called “attentional focus.”

An example of an internal focus during the squat might be to “squeeze your glutes on the way up,” while an external focus could be to “drive the floor away from your body.”

Doesn’t sound like it would make much difference, does it? But the science shows that it does. After telling subjects to “pull with their back, instead of with their arms, by adducting the scapulae and concentrating on the tension in the back musculature,” the researchers found that muscle activity in the lats was up by nearly 20 percent.

Other studies report similar results. After telling subjects to “use your gluteal muscles to lift your leg while keeping your hamstring muscles relaxed” during the prone hip extension, University of Michigan researchers found that muscle activity in the glutes doubled.

In other words, a simple shift in attentional focus led to a marked increase in muscle activity. Even more interestingly, this shift in focus has also been shown to make a muscle grow faster than normal.

Research published in the European Journal of Sport Science tracked the results of two groups of men who trained with weights three times a week for eight weeks. Both groups did the same exercises—the barbell curl and leg extension—but with one key difference: Subjects in the first group were told to “squeeze the muscle” during each rep, while subjects in group two were told simply to “get the weight up.”

The results were striking. Subjects who were told to “squeeze the muscle”—an internal focus of attention—there was a 12 percent increase in the size of the biceps.

That was almost double the gains seen in the group who were told to “get the weight up,” where the average increase in biceps size was just 7 percent. It was a different story with the quads, where there was no significant difference in muscle growth between the two groups.

The researchers think this might have been down to the fact that untrained individuals have a hard time establishing a “mind-muscle connection” in the quads compared to the biceps. In fact, several subjects said that they found it much easier to focus on their biceps than their quads.

Apart from the potential for faster muscle growth, there’s another benefit to an internal focus of attention during certain exercises.

When you focus on squeezing the muscle you’re working, rather than simply getting the weight up, you’ll often find that doing so requires the use of a lighter weight. Lighter weight means there’s less stress on the joints, which means less potential for injury.

Here’s how Charles Gaines and George Butler describe it in their 1977 book Pumping Iron.

Corney was not doing this after looking at a few studies on the subject of attentional focus and muscle growth. Rather, it was something that came instinctively. After many years of training, he knew he could do a better job of sending the “make me bigger” signal to his muscle fibers with his mind fully engaged on the task at hand.

All of this does come with a few caveats: Most studies that show a benefit to an internal focus of attention involve the use of relatively light weights and moderate rep ranges. Focusing on what a particular muscle is doing isn’t a good idea on every exercise, especially if it’s a compound lift that involves the use of heavy weights.

In fact, studies show that the effectiveness of an internal focus is reduced with heavier weights. In one study, muscle activity in the pecs was increased by 22 percent when subjects were told to focus on their chest muscles when they benched a weight that was roughly 50 percent of their one-rep max. However, the difference in muscle activity between the two conditions was cut in half when they used heavier weights.

When you go to the gym, you need to decide why you’re there. Are you just simply trying to lift weights, or is your aim to use those weights to stimulate your muscles in such a way that they adapt by getting bigger over time? If your answer is the former, you’ll get better results (in certain exercises at least) by focusing intensely on the muscles you’re supposed to be working, rather than just shifting a weight from point A to point B.