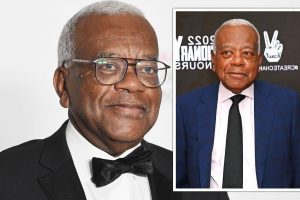 Knighted for his services to journalism at the end of the last millennia, Sir Trevor McDonald has earned his place as one of the most respected journalists in the UK. The man who famously retired twice, in 2005 and 2008, he has long battled his own demons. Speaking late last year, the famous anchor discussed one of his struggles: binge drinking.

Speaking about his experiences with binge drinking the veteran presenter said: “The problem with that is that it’s never just a glass.

“I get home at 11pm and then look at my watch and it’s approaching midnight and I’m on my fourth glass”.

McDonald said the problem was exacerbated by the drinking culture at the time when high alcohol consumption was not considered a warning sign.

He reflected: “I discovered how quickly your stocks dwindle when you’re home in the evenings.”

Furthermore, McDonald explained how early in his career in the 1970s day drinking was considered normal explaining it was “normal for staff to spend hours in the pub.

He added: “There was as bar across the street and most people could be found there day and night.

“My co-anchor Reggie Bosanquet had to be dragged out at five minutes to 10 and persuaded to sit down. How we used to carry on working I’ll never know.”

Nowadays the attitude to binge drinking is different and most people recognise it is a bad habit to engage in.

The NHS says: “Dependant drinking usually affects a person’s quality of life and relationships, but they may not always find it easy to see or accept this.

“Severely dependent drinkers are often able to tolerate very high levels of alcohol in amounts that would dangerously affect or even kill someone.”

When someone tries to cut down on alcohol this can normally result in severe withdrawal symptoms such as hand tremors, sweating, hallucinations, depression, anxiety, and insomnia.

The NHS recommends the most someone should drink per week is 14 units of alcohol per week.

If a person is concerned about their drinking, the first step recommended by the NHS is to see a GP.

From there they will be able to suggest specialist services and treatments available to people.

Furthermore, there are also a number of charities and support groups that can give support and advice for people struggling.

Medicines, detoxification, and counselling are all effective methods of helping someone treat their alcohol misuse, supporting them through this time will make the process easier and less distressing.