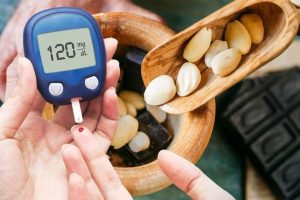 To counter this harmful process, people with diabetes must turn to their diet. Specific items have been shown to lower high blood sugar levels, which tend to spike after eating.

“Our study showed that almonds tempered the post-snack blood sugar response. This is important because consistently high blood sugar levels after eating a snack or a meal may be associated with increased risk for heart disease and for death from all causes, whether a person has type 2 diabetes or not” stated doctor Rachel Brown, Lead Researcher of the study and Professor of Human Nutrition at the University of Otago.

In the study of 100 New Zealand adults aged 18 – 65 years, participants ate either at least 42.5g of unroasted almonds or a calorie-matched sweet biscuit snack.

Both snacks accounted for 10 percent of total calorie intake, so in some cases, the amount of snack consumed was higher.

Blood glucose and appetite ratings were measured at baseline and at 15 or 30-minute intervals after they finished eating.

Results showed that the blood sugar response was lower among participants after the almond snack versus the biscuit snack.

What’s more, the study hinted at the weight loss benefits of eating almonds, which in turn could aid blood sugar control.

There were no differences in the amount of calories eaten at lunch after the almond or biscuit snacks.

However, based on the participants’ food intake records, those who ate the almond snack reported eating 150 calories less (on average) over the course of the day.

If sustained, this calorie deficit could theoretically result in approximately half a kilo (about a pound) of weight loss per month.

This single-day analysis is part of a year-long study examining the long-term implications on weight management.

Observations from this acute study are consistent with results from a previous study published in the European Journal of Nutrition.

Researchers found that a mid-morning snack of almonds (42g), compared to no snack, helped control appetite and resulted in fewer calories eaten at lunch and dinner.

Results of this previous study suggest that rather than skipping out on a snack, eating almonds as a mid-morning snack may help curb hunger.

Many people have type 2 diabetes without realising. This is because symptoms do not necessarily make you feel unwell.

Symptoms of type 2 diabetes include:

“See a GP if you have any of the symptoms of type 2 diabetes or you’re worried you may have a higher risk of getting type 2 diabetes,” advises the NHS.

“You’ll need a blood test, which you may have to go to your local health centre for if it cannot be done at your GP surgery.”