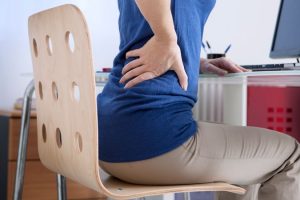 A new study questions the conventional wisdom of using steroids and anti-inflammatory drugs like ibuprofen to treat low back pain if exercise and other non-drug therapies don’t work right away.

Those medications offer relief from acute pain but may actually increase a person’s chances of developing chronic pain, said the study published in Science Translational Medicine. The study indicates that inflammation is a normal part of recovering from a painful injury and that inhibiting inflammation may result in more-difficult-to-treat chronic pain.

“For many decades it’s been standard medical practice to treat pain with anti-inflammatory drugs,” Jeffrey Mogil, a psychology professor at McGill University, said in a school news release. “But we found that this short-term fix could lead to longer-term problems.”

Researchers looked at low back pain because it’s so common, with 25% of U.S. adults saying they had low back pain in the previous three months, according to the CDC. Acute back pain is defined as lasting less than four weeks while chronic back pain lasts more than 12 weeks.

By examining blood samples, researchers discovered that people whose low back pain was resolved had high inflammation driven by neutrophils, a type of white blood cell that helps the body fight infection, the study said.

“Neutrophils dominate the early stages of inflammation and set the stage for repair of tissue damage. Inflammation occurs for a reason, and it looks like it’s dangerous to interfere with it,” Mogil said in the news release.

The research team found that blocking neutrophils in mice prolonged pain in the animals up to 10-fold. Pain also was prolonged when the mice were given anti-inflammatory drugs and steroids, the news release says.

McGill University said other studies support the findings. The school cited an analysis of 500,000 people in the United Kingdom. The analysis found that those taking anti-inflammatory drugs for pain were more likely to have pain 2 to 10 years later.

While saying the study suggests it’s time to reconsider how pain is treated, researchers called for clinical trials on humans, not just observations of people with low back pain.

Experts warned about accepting the results without further investigation.