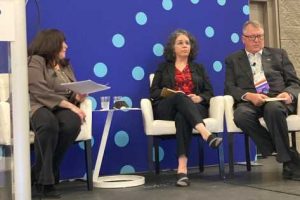 ORLANDO, Fla. – The Department of Veterans Affairs is a pioneer in the field of electronic medical records.

Long before the ubiquity of commercial EHRs, the Veterans Health Information Systems and Technology Architecture, or VistA, acted as a homegrown solution to meet the needs of veterans and providers.

By the time it became the official VA EHR in the 1990s, there were many iterations across the system.

“The history is important as we move forward in a different direction,” Dr. Terry Adirim, program executive director of the EHR Modernization Integration Office at the VA, said in a HIMSS22 session Wednesday.

“As the new leader of this modernization effort, I am sensitive to the history and appreciate VA’s spirit of innovation,” she said.

At the same time, she said, it’s a decades-old system meeting the end of its lifespan.

That’s part of what compelled leadership in 2017 to pursue a commercial solution – namely, by partnering with Cerner.

“By implementing the same system as the Department of Defense, there were opportunities to benefit military service members and veterans,” Adirim explained.

With increased availability of private healthcare sites in healthcare information exchanges, she said, “The new EHR promises to provide a more complete view of veteran care.”

“As a physician, I salivate at that opportunity,” she said. “Having that complete record is really helpful, especially for those complex patients.”

But the rollout hasn’t been smooth sailing. The VA has faced numerous hurdles along the way, from COVID-19-related delays, to setbacks following the October 2020 rollout of the new EHR at Mann-Grandstaff VA Medical Center in Spokane, Washington.

The panelists spoke about lessons learned from that effort – including, as Dr. Chuck Kowalewski, a physician informaticist from the VA’s functional champion team, put it, “that culture matters.”

“History matters,” he went on.

The shift from a document-based legacy system to a data-based system, he said, requires a broader change in thinking beyond basic training on how to use the tools.

As an intern, he noted, he would often process and develop patient plans as he wrote down notes by hand, or even when he wrote them in a document-based electronic health record.

By contrast, in “a data-formatted EMR, I’m not writing it down because it’s given to me. It’s right there in front of me.

“That has to be recognized – and we are now attending to that as we do our training,” he said. “It is a big shift.”

“It’s those hours, days, weeks, months where you’re getting that support,” she said. “I think we’ve made a lot of improvements.”

Kowalewski referenced the technology adoption life cycle, which exhibits the range of user behaviors around innovation.

“That person who’s a ‘late laggard’ is just as important as the early adopter when it comes to healthcare,” he said. “It’s not judgmental; it’s just the way it is.

That means, he said, extending support time and working to help super-users learn the system.

“Working with Cerner on the training program, we’ve really buffed that up,” he said. “It’s not just an introduction to the EMR; it’s also supporting them once they’re immersed in it.”

Other changes include working more closely with the Office of Information and Technology groups and liaising with the Veterans Health Administration, said Prietula.

“We’re bringing together OIT, VHA into every planning activity that we do,” along with working more closely with the Federal Electronic Health Record Modernization Office and implementing life-cycle budget planning, she said.

“Those lessons that we’ve learned, we’re applying every day,” she said.