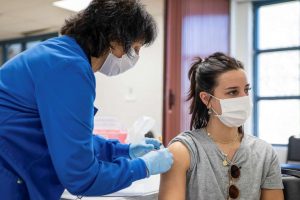 A study released Tuesday by the National Institute of Allergy and Infectious Diseases provided strong evidence that the coronavirus vaccines will stand up against the new variants.

Researchers at the agency, which is led by Dr. Anthony Fauci, examined white blood cell samples from 30 people who had contracted and recovered from COVID-19 prior to the emergence of virus variants in locations such as the United Kingdom, South Africa and Brazil.

Their studies found that the T cells, a key component in the body’s immune system, remained active against the virus.

“While larger studies are needed, the researchers note that their findings suggest that the T cell response in convalescent individuals, and most likely in vaccines, are largely not affected by the mutations found in these three variants, and should offer protection against emerging variants,” the NIAID said in a news release.

This data was originally released in February as a preprint before it was peer reviewed.

More studies will be conducted to collect additional data on the vaccines’ strength against the variants and whether or not booster shots will be required.