Vaping, marijuana use in 2019 rose in college-age adults 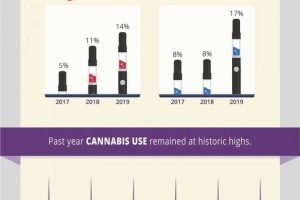 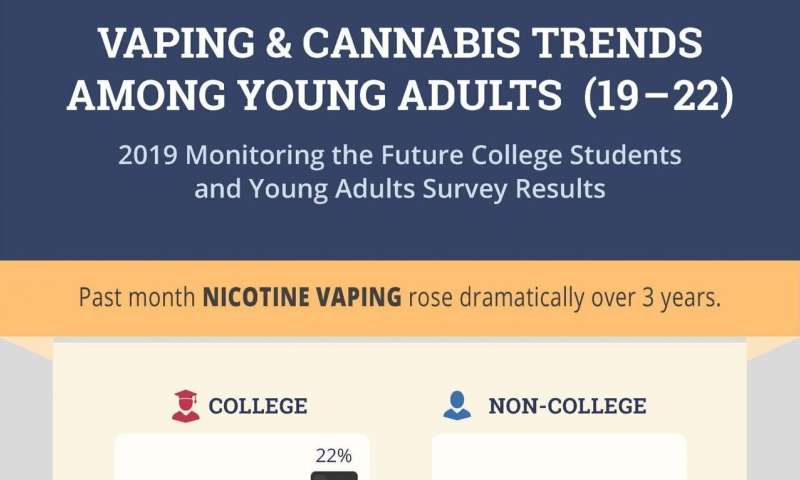 Vaping marijuana and vaping nicotine rose sharply in the past three years among college-age (19-22 years old) adults, according to 2019 survey results from the Monitoring the Future (MTF) study. The percentage of college students who said they vaped marijuana in the past 30 days rose from 5.2% in 2017 to 14% in 2019. The corresponding percentages for their non-college-attending peers increased from 7.8% in 2017 to 17% in 2019.

The percentage of college-age adults aged 19 to 22 who vaped nicotine also rose dramatically between 2017 and 2019. In 2017, 6.1% of college students and 7.9% of those not in college said they vaped nicotine in the past month, rising to 22% and 18%, respectively, in 2019. These increases in vaping marijuana and nicotine are among the largest increases in use for any substance reported by the study in its 45-year history.

“We are seeing an increasingly concerning trend,” said Nora D. Volkow, M.D., director of NIDA. “Many young people may view vaping and cannabis use as ‘safer’, but the reality is that nicotine is highly addictive, and cannabis can also be addictive, particularly in younger adults for whom the brain is still developing.”

The MTF study has been annually tracking substance use among college students and non-college adults since 1980. Results are based on data from college students one to four years beyond high school graduation who are enrolled full-time in a two- or four-year college in March of the given year, compared with same-age high school graduates not enrolled full-time in college.

The 2019 data also revealed a continued high prevalence of marijuana use among young adults, who are 19 to 22 years old. In 2018, 43% of this group—regardless of college attendance—reported using marijuana in the past year, and this percentage was unchanged in 2019. Particularly notable is the prevalence of daily, or near-daily, use of marijuana among those not attending college in 2019—at 15%, it is at the highest level since the survey began. This compares to 5.9% of college students who reported daily, or near-daily, use of marijuana.

The 2019 MTF survey data reflect drug use patterns prior to the outbreak of the COVID-19 pandemic. The pandemic’s impact on substance use and related behaviors and attitudes among the nation’s young adults may be reflected in future MTF survey results. The 2020 MTF middle and high school student findings are due to be released later in 2020.

Other highlights from the 2019 survey results on college-age adults include:

END_OF_DOCUMENT_TOKEN_TO_BE_REPLACED

END_OF_DOCUMENT_TOKEN_TO_BE_REPLACED
We and our partners use cookies on this site to improve our service, perform analytics, personalize advertising, measure advertising performance, and remember website preferences.Ok