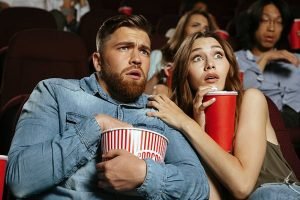 Violent or tense films have been proven to leave people feeling stressed, nervous, exhausted and grabbing snacks for consolation.

But viewers of romantic comedies or narrative films did not show the same emotional response – and did not eat as much chocolate or crisps.

Intense films may lead people to comfort eat as a way of dampening the stress triggered by hormones increased by the movie, scientists said. 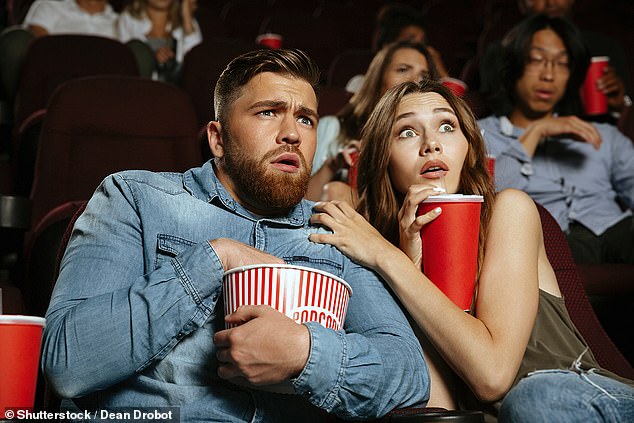 Watching scary films can make a person reach for fattier foods to comfort their nerves and therefore gain weight, a study by Lebanese researchers has found

Researchers said theirs is the first study to look into the effect of films on our food choices and appetite.

Previous studies have linked violent video games to an increase in appetite.

The findings suggest it’s not just sitting still while watching which leads to weight gain, but what is shown on the screen, too.

The study, conducted by Lebanese American University in New York, involved 84 participants aged between 20 and 30 who were randomly assigned to watch either a violent movie or a romantic comedy.

Before the study, various measurements were taken including their heart rate, blood pressure and grip strength, and their stress levels and appetite were assessed.

Movie watchers were given a tray containing a range of snacks, including popcorn, crisps, biscuits, chocolate, sweets, apples, orange juice and Pepsi.

The participants were told they could eat whatever they wanted, and were left alone and unobserved during the film to get comfortable.

DOES TIME IN FRONT OF THE TV RAISE HEALTH RISKS?

Sedentary behaviour and lack of exercise is associated with poor health outcomes. Some recent studies have found that:

People who watched the violent film had higher scores for nervousness, exhaustion and sadness after they had seen the move, but the group who watched the romantic comedy had no differences.

Neither group’s participants showed differences in their appetite or hunger levels compared to the start of the film, according to the findings published in Eating Behaviours.

But the violent group had eaten more while watching the film, with an average of 6.45 food items compared to 4.93 in the rom-com group.

The authors, led by Dr Lama Mattar, said: ‘Our results reported that violent movies had an acute stressful and intense effect on the spectators, even though watching a movie is a passive activity.

‘Participants in the experimental group scored higher on the nervousness and exhaustion subscales compared to baseline scores, whereas controls did not show any increase in these scores.’

No significant difference in the consumption of sugary items was observed between the two groups.

‘This result implies that weight gain and obesity associated with screen time may not only be attributed to the fact that it is a sedentary activity but also to an associated increase in energy-dense snacking,’ the authors said.

An explanation for the heavy snacking could be that tasty food is known to dampen the stress response and promote positive emotions, such as a sense of security and well-being, the authors said. This is more commonly known as comfort eating.

‘Subjects who have been exposed to a violent movie may be driven toward fatty and salty items in order to dampen the stress that was triggered by the movie,’ Dr Mattar said.

Generally, chronic life stress ‘could also increase preference for energy- and nutrient-dense foods or what we call comfort food.’

‘On the other hand, some studies have demonstrated that the increased auditory stimulation, tempo and rhythm of music which are characteristic of violent movies might have an effect on food choice and intake, by making the spectator choose less healthy options,’ the study said.

It is believed by the researchers that this is the first study to investigate the acute effect of violent content in movies on food intake, food choices and appetite.

At a time when the Government is attempting to tackle childhood obesity, the authors believe their research highlights some key issues.

They said: ‘Addressing this issue and its implication in children is a must. This could be done through public health interventions that tackle movie content.’

But a study by the University of South Australia found the opposite in children – TV viewing had more of an impact on the waistline than any other behaviour.