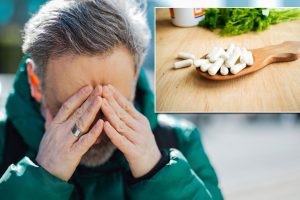 Dog Dementia: Owner outlines the impact on her pet

However, since those treatments are not yet with the patients who desperately require them, research has turned to how a person may reduce their risk of developing dementia.

This means looking to the tools available both to doctors and the ordinary consumer.

A recent study has found vitamin K may have the potential to help current dementia patients.

Scientists from the AlMaarefa University in Saudi Arabia have found vitamin K may protect against cognitive deterioration.

Published in the journal Experimental Biology, the study was conducted on rats given vitamin K supplements.

At the end of the 17-month study it was found the rats who had been given vitamin K supplements had reduced levels of cognitive impairment, anxiety, and depression.

“However, supplements are also available to substitute for natural sources in case of inability to consume them.”

Meanwhile Dr Jennifer Bramen said of the results they were “cautiously optimistic”.

Discussing the impact of vitamin K they noted: “There are many forms of vitamin K, and they all have different dietary sources.”

While vitamin K could play a role in preventing cognitive decline in dementia patients it will depend greatly on the type of vitamin K.

Some forms may be more or less effective than others.

As a result, further trials are needed to establish which forms of vitamin K are the most efficacious against dementia.

Although further trials are required, the results of the study open another pathway of possibility for vitamin K based treatments of dementia in the future.

Current data predicts one in three people born today will develop dementia in their lifetime.

In order to beat dementia sooner they will need more financial heft not just from charities but from governments to break the upcoming wave of dementia cases.

With support from all facets of society thousands of families could be spared the pain of losing someone to dementia.