Wal-Mart Is Having A Crazy Instant Pot Sale RN 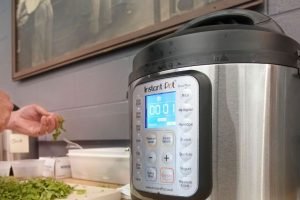 The near-universal obsession over the Instant Pot shows no signs of slowing down. This time-saving kitchen appliance can make any number of delicious meals, from ribs to risotto. People are even using it to make hard-cooked eggs, cakes, and yogurt. If you haven’t had the chance to jump on board the multi-cooker train yet (or you need a second one because you’re such a superfan), this Instant Pot sale from Wal-Mart might just be the kick in the pants you need.

Starting Wednesday, April 24 and going on until Monday, September 2, Wal-Mart will have the Instant Pot LUX60 on sale for just $59. That’s $40 off the original price of $99.

At this price, it’s a truly outstanding value since, you would spend hundreds of dollars on separate appliances for each of its many functions. This specific model is a true multi-cooker, since it works as a pressure cooker, slow cooker, rice cooker, steamer, has sauté/browning functions, and is a warmer—all in one magnificent kitchen appliance. The single pot with so many uses saves counter and storage space too!

As if that wasn’t enough, the do-it-all Instant Pot makes a really great gift—Mother’s Day, Father’s Day, bridal showers, graduations—anyone who needs to quickly pull together a delicious meal would appreciate this magical kitchen tool.

Remember, the Wal-Mart sale goes on until September 2, but you should jump on it now so you can get cooking as soon as possible.

From: Woman’s Day US