Warnings for cancerous chemicals in suncream could be ‘watered down’ 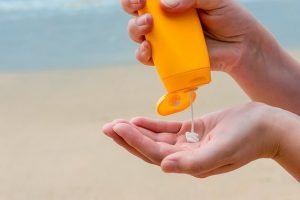 Suncreams and cosmetics could contain cancer-causing chemicals, but the warnings may be hidden after manufacturers have hit back.

Campaigners and health officials are concerned the threat of titanium dioxide, ‘a substance suspected of causing cancer’ if it is inhaled, is being watered down.

The chemical is used globally as a brightening agent in a range of products, including some sweets, chewing gum, cake icing and plastics.

It is also used in toothpaste, some makeup to lighten skin tones and sunscreams because of its ability to reflect ultraviolet (UV) rays.

But their recommendations to warn customers on labelling may be ignored by the European Commission sharing the industries’ view that there isn’t enough robust evidence. 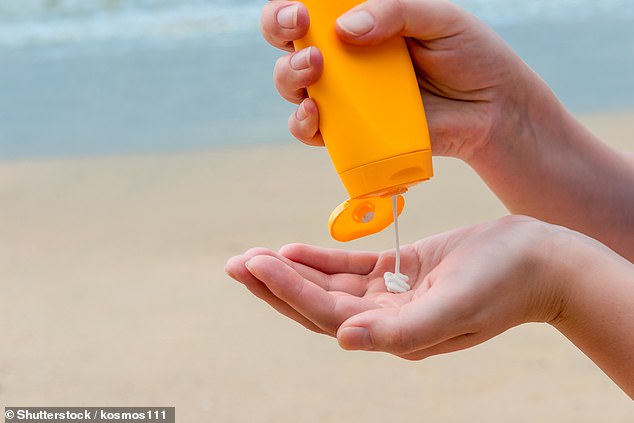 The European Chemicals Agency (ECHA) has classed the chemical titanium dioxide, a whitening agent, as ‘a substance suspected of causing cancer’, backed by others, including the World Health Organisation’s International Agency for Research on Cancer.

In November, France said it was banning the use of titanium dioxide in food in light of studies suggesting it may cause cancer.

But European environmental campaigners say intensive lobbying by industry and some EU states, including the UK – worth millions of pounds – could interfere with the production of  warning labels on some products.

WHAT IS TITANIUM DIOXIDE?

Titanium dioxide is a fine white powdered form of the metal element titanium.

The chemical is not thought to occur naturally inside the human body.

It is commonly used around the world because it is brilliant white and can be used to colour a huge range of objects.

Everyday items which are likely to contain titanium dioxide as a colourant include toothpaste, suncream, makeup – in which it is used to brighten the skin, plastics, paper, wall paint, ink and white medicine pills.

The US Food and Drug Administration says the chemical is safe to use, and that consumers’ risk of exposure to high levels is low.

Researchers say the chemical may enter the human bloodstream if it is inhaled or eaten.

The European Environmental Bureau (EEB), a group of around 150 environmental organisations in more than 30 European countries, said unprecedented lobbying meant the European Commission may ignore the ECHA’s recommendations.

The EEB said the commission accepts that products with the substance in powder form should carry the warning ‘suspected carcinogen’.

But that it now wants labels to only say ‘warning, droplets may be formed when sprayed’ for liquid products, such as some spray-on sunscreens.

The EEB said that if such a move is approved, ‘it would be a flat rejection of the science for commercial reasons’ and will ‘set a dangerous precedent’.

‘Yet the commission wants to dodge this reality. Hiding health warnings to maintain sales of a toxic product is wrong.

‘We are seeing this because industry has spent millions on spin doctors and expensive lawyers when it should have spent that money making its products safer.’

The ECHA reached its conclusion that titanium dioxide is suspected of causing cancer if it is inhaled after examining data on how the substance causes tumours in animals, including rats.

It said that while there are no human studies showing a link, there is ‘not sufficient justification to consider the carcinogenic effects as not relevant to humans’.

A UK/Slovenia position paper on the issue, submitted to the European Commission, questions the basis for regulation, saying consideration needs to be made of the ‘regulatory, environmental and socio-economic consequences’ of classifying titanium dioxide as a potential carcinogen.

It saidd: ‘In our opinion TiO2 (titanium dioxide) has no intrinsic or extrinsic property to cause cancer’, adding that tumour formation was a ‘secondary non-specific effect’ of inflammation that may come from ‘exposure overload’ to the substance.

The Titanium Dioxide Manufacturers Association (TDMA), which has been contacted for comment, says on its website that ‘robust, scientific evidence shows that titanium dioxide is safe and does not cause cancer’.

It adds that the opinion that it is a possible carcinogen ‘relates to inhalation of titanium dioxide’ and ‘has low relevance to food products’.

With food products, titanium dioxide ‘is incorporated in the finished product and there is almost no risk of inhaling it’, the website says.

‘Likewise, the TiO2 in finished products such as paints and plastics is either insoluble or solid and cannot be inhaled.’

The commission’s proposals are due to be voted on by government officials meeting in Brussels on April 14 and 15.

Helen Callard, from Cancer Research UK, said: ‘Titanium dioxide has previously been linked to cancer in animals, but so far there is no good evidence it causes cancer in people.

‘But we do know that cancer risk can be reduced by protecting our skin from sun damage.

‘So, rather than ditch the sunscreen, use it as a last line of defence alongside spending time in the shade and covering up.’

WHAT OTHER CHEMICALS DO THE ECHA BELIEVE CAUSE CANCER?

Some common things in our daily lives are known by most people to cause cancer – for instance, tobacco smoke and ultraviolet rays from the sun.

Whether or not you will develop cancer will always depend on both dose and exposure – in other words, how much of the substance you are in contact with, how often and in what way.

If the substance is not released into the environment, or if we are not exposed to it, it will not pose a risk to us.

When there is evidence that a substance causes cancer, it will be classified as such. This results in limitations agreed at EU level on how they can be used.

Examples of chemicals that are known to cause cancer: