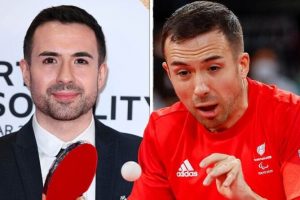 Strictly: Will Bayley recalls not wanting to go on stage

The athlete, who also participated in the seventeenth series of Strictly Come Dancing back in 2019, suffers from a condition that affects all four of his limbs and spent large amounts of his childhood in Great Ormond Street Hospital. Johns Hopkins Medicine explains that arthrogryposis – also called arthrogryposis multiplex congenita (AMC) – is a term used to describe a variety of conditions that affect the joints. For Bayley, the condition causes curvatures in both his hands and his feet.

Having endured multiple painful, bone-breaking surgeries in a bid to try and help him to walk, Bayley still experiences symptoms of the condition, symptoms that can include the following:

With an estimated one out of every 3,000 children affected from birth, the condition is rare, but as many as 150 syndromes have similar features to arthrogryposis.

Johns Hopkins Medicine continues to state that the cause of the condition is currently unknown, although it is thought to be related to inadequate room in the uterus and low amniotic fluid. The patient may have an underlying neurological condition or connective tissue disorder.

For Bayley, arthrogryposis has made him vulnerable to many other serious health conditions, one of which occurred when he was only seven years old.

Speaking to The Mirror back in 2019, Bayley revealed more about his diagnosis of blood cancer, also known as non-Hodgkin lymphoma.

Unrelated to arthrogryposis, Bayley once again received treatment at Great Ormond Street hospital, where he stayed for about a year and a half.

“It was really bad at the time, I was in hospital for about a year and a half,” Bayley said.

“We stopped the operations on my legs because we decided to just focus on the cancer. I didn’t have any more after that, which is probably why my feet aren’t as good as they could be.”

Only young at the time, Bayley, now 34, recalls at one stage he had simply had enough of treatment.

He added: “It was a tough one. I knew I was really ill but I remember saying to my mum that I didn’t want any more treatment. I refused to go.

The NHS explains that non-Hodgkin lymphoma is a type of cancer that develops in the lymphatic system – a network of vessels and glands spread throughout the body.

The lymphatic system is part of the immune system and contains a clear fluid that carries infection-fighting white blood cells known as lymphocytes. When non-Hodgkin lymphoma develops, affected lymphocytes start to multiply in an abnormal way and collect around the lymph nodes.

In the UK, more than 13,000 people are diagnosed with non-Hodgkin lymphoma each year, with the most common tell-tale sign a painless swelling in the lymph node – usually in the neck, armpit or groin.

Some people with non-Hodgkin lymphoma also have other, more general symptoms. These can include:

The NHS recommends that individuals who have experienced symptoms, particularly swollen glands, for more than six weeks, should seek medical advice.

Thankfully, treatment using a trial drug was able to cure Bayley of non-Hodgkin lymphoma, who added: “To be alive is amazing, really. It managed to get me through it, I’m so lucky that it worked.”

Unlike non-Hodgkin lymphoma, arthrogryposis cannot be cured, but there are both surgical and non-surgical methods that can be used to improve range of motion and function at the sites of contracture.

There are also orthopaedic surgical procedures to help with lower extremity contractures in the knees and hips. These corrective surgeries can also provide improved range of motion and improved ability to bear weight and walk.