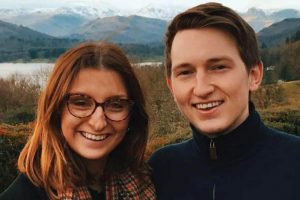 A woman has spoken out about a condition which left her unable to have sex comfortably with her boyfriend.

Louise Ritchings, 25, has always found it difficult to get intimate which has made her self-conscious over the years.

The project manager, from Cheshire, has been with her graphic designer boyfriend Zak Rains, 26, for four and a half years.

While the couple have a healthy relationship, it hasn’t always been an easy ride for Louise and Zak in the bedroom.

Louise suffers from a lot of urinary infections after having sex, as well as a tight vagina which has caused painful smear tests.

But after years of struggling from what Louise described as “excruciating sex”, she said she finally found a solution – a £3 lube.

She told Fabulous Online : “I haven’t had many sexual partners, I’ve never been confident about having sex. I put pressure on myself which made the sex more painful and I was embarrassed afterwards.

“In the early days [of our relationship] we’d have sex a couple of times a week. But my vagina being so tight meant that certain positions are out.

“My friends told me about doggy style and we tried it – but I really struggled. I’m not an expert, but Zak is well-endowed so that can be a challenge. Now we tend to stick to the missionary position.

“Sometimes the discomfort has prolonged me reaching orgasm too, but more because of the mental side. Sometimes if it feels uncomfortable I don’t want to ruin the moment but I start to get intrusive thoughts and feel tense and that means I take longer.”

Despite sex never being an important part of their relationship, Louise has claimed to have found a cure to resolve her bedroom issues.

She explained: “I don’t suffer from vaginal dryness, but I tried lubricants in the past to see if it could make it easier.

“I always found they worked for about two minutes and then got really sticky which made things worse not better.”

Louise discovered KY Jelly when she was browsing in Superdrug which made an “immediate difference” on her life.

She continued: “It makes having sex easier and much smoother for both of us. It’s given our sex lives a huge boost, and now we are back at it more often.”

END_OF_DOCUMENT_TOKEN_TO_BE_REPLACED

END_OF_DOCUMENT_TOKEN_TO_BE_REPLACED
We and our partners use cookies on this site to improve our service, perform analytics, personalize advertising, measure advertising performance, and remember website preferences.Ok