Home » Health News » Woman Had a Huge Tapeworm 'Egg' Encased in Her Brain. Why She's Super Happy About It.

Woman Had a Huge Tapeworm 'Egg' Encased in Her Brain. Why She's Super Happy About It. 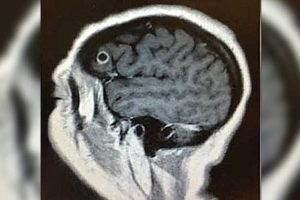 When is it a huge relief to hear you have a parasite lurking in your brain?

When it's not a cancerous brain tumor.

That was the recent experience of a woman in New York, 42-year-old Rachel Palma, who had gone to the doctor's office for some odd symptoms. For example, she had trouble remembering words, and would suddenly drop items like her coffee mug, according to local news outlet WABC-TV.

When doctors scanned her brain with an MRI, they saw a lesion that was very odd-looking, said Dr. Jonathan Rasouli, a neurosurgery resident at Mount Sinai Health System in New York, who treated the patient. Based on this scan and the woman's symptoms "we were concerned…that that lesion could potentially be cancerous," Rasouli told Live Science. Specifically, doctors suspected she had a malignant brain tumor, an aggressive type of cancer that could be life-threatening. [8 Awful Parasite Infections That Will Make Your Skin Crawl]

But when doctors performed surgery to remove the lesion, they found a huge surprise. Instead of seeing the soft tissue typical of a brain tumor, they saw something that looked more like a rock or a quail egg, Rasouli said.

"What we saw in surgery was not at all what we were expecting," Rasouli said.

They removed the lesion, placed it under a microscope and cut into the tissue. That's when they saw a baby tapeworm emerge.

"It was such a relief to see that instead of having a malignant brain tumor" she had tapeworm, Rasouli said.

Palma was diagnosed with neurocysticercosis, a parasitic disease that occurs when a person ingests microscopic eggs from a pork tapeworm (Taenia solium). When the eggs hatch, the larvae can travel throughout the body, including to the brain, muscles, skin and eyes, where they form cysts, according to the World Health Organization.

Although the larvae can travel anywhere in the body, they have a particular affinity for the brain because of the organ's robust blood supply, Rasouli said.

Once the parasitic cyst was removed, Palma didn't need any more treatment for the condition.

Although rare in the U.S., this tapeworm is common in developing nations, including countries in Latin America, Africa and Asia.

But one big mystery still remains: How did Palma contract the parasite? She appears to have no risk factors for neurocysticercosis — she hadn't traveled out of the country or eaten undercooked meat.

The mystery may never be solved, but Palma has decided to stop wondering about it. "I stopped asking questions and started celebrating and making the most out of life," Palma told WABC-TV.

END_OF_DOCUMENT_TOKEN_TO_BE_REPLACED

END_OF_DOCUMENT_TOKEN_TO_BE_REPLACED
We and our partners use cookies on this site to improve our service, perform analytics, personalize advertising, measure advertising performance, and remember website preferences.Ok