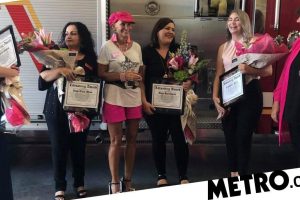 Reba Mason-Mikutowicz, 58, from Arizona, U.S. was doing some shopping in department store Macy’s, when she suddenly collapsed into a rack of clothing.

She had a cardiac arrest, but thanks to four quick thinking members of staff in the store who performed CPR, she was reunited with them just a week later.

Reba met the department store staff, who she named ‘Macy’s Angels’, yesterday to thank them for saving her.

She tells Metro.co.uk: ‘There are no words to describe how grateful I am for what they have done for me.’

Reba was diagnosed with breast cancer in 2011 and three years later, she was told that it was incurable as it had spread to her bones.

Since then, Reba has continued having treatment for the disease and is determined to stick around for as long as she can to spread awareness and help others with cancer.

She set up a nonprofit called Reba’s vision to provide free 3D mammograms for women in her area for free, as living in the U.S., you need health insurance to have the test.

In January this year, Reba was given a pain pump system, which consists of a reservoir implanted between the muscle and skin that carries pain medication from the pump to the spinal cord and nerves.

Last week, on July 10, she had an appointment to replace the medication in the pump and afterwards she was feeling a little ‘cloudy’.

She spoke to the medical team who said it would pass and she was monitored for 30 minutes before being sent home.

Reba drove to Macy’s at Arrowhead mall on her way home and picked up some shoes – something she says she doesn’t remember at all.

She says: ‘The next thing I remember is I was in the ICU and my husband was filling me in on what happened. I do not remember driving or buying anything.

‘I am a frequent shopper and had I gone home I would not be talking to you right now.’

While in the store, Rebi collapsed into a rack of clothing and had a cardiac arrest. A call went out in the store that a customer was in distress and a group of managers who were having a meeting came to help.

The woman, called Princella, Rosy, Claudette and Amy, had recently completed CPR training and they started to give chest compressions to help Reba, who had no pulse and was not breathing.

How to perform CPR

Even if you haven’t been trained in CPR, you can carry out hands only CPR.

The emergency services were called and in another strange twist of fate, the fire department from Peoria, rather than Glendale responded as they were closer to the scene.

Reba adds: ‘I work closely with the Peoria fire department as they are one of my main supporters in the month of October for breast cancer awareness. When the firemen arrived they were like oh my God it’s Reba and then sprung into action.’

She says she believes God saved her that day, as if she hadn’t been in the store, she would have been at home alone. Her husband Steve was at work at the time.

She spent two days in intensive care before being released and after writing a Facebook post about the incident, one of the women who saved her got in touch.

She arranged to meet the women and the firefighters who she already knew at their fire station yesterday.

Reba even got a third pair of shoes to make up for one of the pairs she’d bought before she collapsed, that got lost in the emergency situation.

She adds: ‘I want people to know in this cynical world that we live in is there are angels everywhere.

‘Don’t walk by someone if you think something is wrong with them – give them a helping hand because our life is so precious.

‘I have always known for the last four years that my time on this Earth.

‘I am going to tell people that God placed a hand in all of our lives and your point you have to fight like a girl and let God lead the way.’

‘At Macy’s, our executives are trained in CPR specifically for situations such as this, and we are delighted that they were able to successfully put their training into practice.’

END_OF_DOCUMENT_TOKEN_TO_BE_REPLACED

END_OF_DOCUMENT_TOKEN_TO_BE_REPLACED
We and our partners use cookies on this site to improve our service, perform analytics, personalize advertising, measure advertising performance, and remember website preferences.Ok