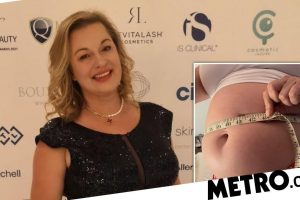 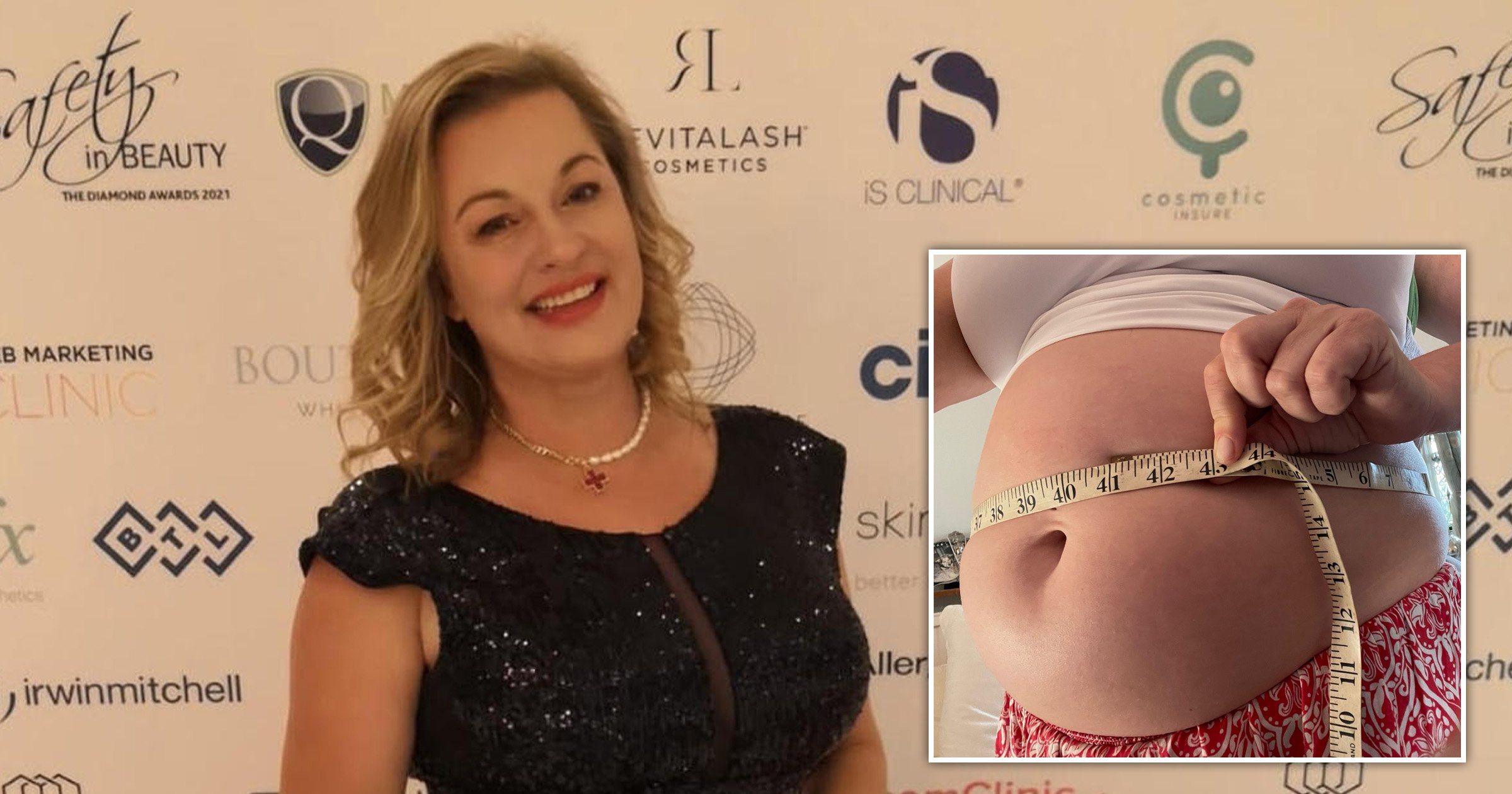 One women’s condition is painful both physically and emotionally – as people tell her she looks pregnant, while in reality she can’t get pregnant due to large tumours on her womb.

Abigail Oleck-Hewett, 49, from Surrey, has suffered with intense periods since she was a teenager and was later diagnosed with fibroids – non-cancerous growths which develop in or around the womb.

The tumours give the appearance of a swollen, pregnant stomach due to being ‘lemon-sized’.

Every month she had ‘floods’ of bleeding each month and underwent a hysterectomy to stop having to endure the extremely heavy periods.

At her condition’s worst, Abigail would have to miss important events like weddings and holidays.

Most cruelly, her illness means she can’t have a baby – despite it being her dream.

After seeking medical advice in 2008, no further action was taken other than to diagnose the fibroids.

‘I hate the way my body looks – everyone who doesn’t know me thinks I’m pregnant,’ Abigail said.

The aesthetic clinic owner and practitioner continued: ‘Sometimes, I quite like it for a brief moment in time, as I rub my belly and think of what it would be like to be pregnant.

‘I really longed to start my own family, but hadn’t found a suitable match until I was 37 and I was overjoyed when I found out I was pregnant.

‘Unfortunately, seven weeks later, I suffered a miscarriage – from then on, my periods went ballistic.

‘I think the periods were 10 times worse than the miscarriage. Each month, they continued to get worse and soon, they became unbearable, so I was advised to go on the pill and stop having a period all together.

‘However, four months later, I flooded my entire bed and I phoned the doctor, who told me this was a typical side effect of the pill.

‘Another four months after that, I placed a tampon in and my period was so heavy, it only lasted for one minute.

‘I walked downstairs to the bathroom and there was a pool of blood across the floor which looked like a murder scene.

‘I was rushed to A&E as I was haemorrhaging and suddenly thrown on a theatre bed – where I was told by the gynaecologist that this had nothing to do with the pill.’

At 13 years old, Abigail had her first ‘horrendous’ period – but as people didn’t talk about periods openly, she didn’t tell anyone.

During a routine smear test, she was finally diagnosed with fibroids and offered removal surgery.

However, this came with many risks, including infertility, and as she still wanted a family, she decided against the procedure.

She claims she wasn’t told of the dangers of living with fibroids when making this choice.

In her 30s, Abigail often found herself having ‘accidents’ in restaurants, taxis and while in bed with her then-boyfriend – who blamed her and asked: ‘why can’t you wear more protection?’ despite already wearing a tampon and two sanitary pads.

Abigail said: ‘As my waistline expanded, I thought I was putting on weight – but I soon realised this wasn’t the case.

‘I decided to do my own research and gathered most of the information I needed from an online community of women who have also shared their experiences.

‘I’m not rare, there’s been hundreds of people who have contacted me in a week with their story – the NHS is great, but there is a distinct lack of understanding with women’s reproductive health.’

Over the past 14 months, she’s been in hospital four times due to blood loss and said a surgeon has told her the pain is equivalent to going through labour for 72 hours.

Her other symptoms include abdominal and back pain, constipation, sleep deprivation, anaemia, mood swings and anxiety – she’s even left bed-bound for two weeks out of each month.

Abigail said: ‘It’s incredibly isolating and I’ve had to cancel plans with friends, clients and family as the pain is so unbearable.

‘I’m sick for half of the month and as someone who owns a busy business, I lose so much money because I can’t work.

‘There’s no financial support for this and people need support, as we can’t afford to take days off work every month.

‘I’m starting to withdraw myself from people and I can’t have a proper relationship with anyone as I don’t feel stable.

‘As the fibroids are pushing my organs up, causing me to have a large belly, I hate shopping for clothes and looking in the mirror as nothing fits me. Instead, I opt for elastic trousers and something baggy.

‘I try to stay active, but I’m so frail and breathless due to the chronic pain and loss of blood – I’ve even vomited before because I’ve taken too many painkillers in a bid to find relief.

‘After the period has ended, I have to throw all my clothes and sheets away as there are too many stains.

‘It’s absolutely put me through the ringer and back and I feel lost due to the grief, pain and anger I’ve been through.

‘It’s a rollercoaster of emotions that can change three or four times in a minute – I’m like two people.’

Initially Abigail was offered a uterine artery embolisation, which means the blood supply is cut off to the fibroids from the leg – resulting in them shrinking.

However, it had been left too long and as they’d grown, she could now only have a hysterectomy.

On August 16 2022, she underwent the procedure has since been overwhelmed with happiness.

While it’s too late for Abigail to have children naturally, she hopes to inform other women in the future who also suffer with intense periods and fibroids of their options.

In Spain, the government has proposed that each person will receive up to five days paid leave if they’re suffering with menstrual problems.

Abigail now wants a UK government debate on this issue.

She added: ‘I’m done, this isn’t for me, but this will benefit my mental health as I know this will help others.

‘I want to be fighting for the future and this will give me the strength to know my pain was all worth it in the end.

‘I’ve found information and comfort within the online community, but if I could go back to my former self, I would have pushed my GP for more advice.

‘Take control over your own body and make informed decisions about your future – we need to stop the taboo on women’s problems.

‘We’re suffering in silence and hiding in bedrooms – it’s time to come out and shout about it.’

Abigail is now petitioning for a Menstrual Bill, which you can support here.