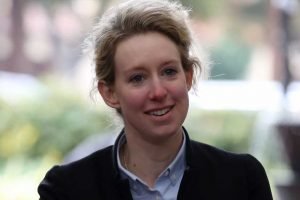 Elizabeth Holmes is sweating for the hearing…

The founder of now-defunct blood-testing company Theranos was spotted working out at Barry’s Bootcamp in San Francisco on Monday, according to Page Six. By her side? Fiancé Billy Evans. Hey, you know what they say: couples who sweat together…then go to court together.

Or at least that’s the case for this dynamic duo.

After she felt the burn at Barry’s, the fallen Silicon Valley appeared in California federal court to find out if the judge has set a date for her trial. The answer? No official word yet.

But doesn’t look like Holmes is sweating it too much (eh? eh?).

In fact, she’s had no problem filling her pre-incarceration time with plenty of activities and this hasn’t gone unnoticed.

Back in August, Holmes and Evans attended Burning Man like average festival goers—except for, you know, the fact that just a few days later an email was sent to remaining Theranos employees that announced the company was officially dissolving. NBD.

Also over the past few months, she’s been able to score a “luxury apartment” in San Francisco, where she reportedly lives with her husband-to-be and continues to keep up with her responsibilities as proud dog mom of her husky or, in her words, “wolf-dog.”

“Clearly she’s behaving like nothing is wrong, and she’s kind of happy-go-lucky. That’s not, I don’t think, how most people in this predicament would behave,” Carreyou added on Monday’s Power Lunch.