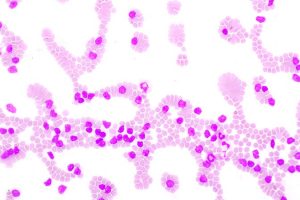 Zanubrutinib (Brukinsa), an irreversible, next-generation Bruton tyrosine kinase (BTK) inhibitor, is designed to minimize the off-target cardiovascular toxicities, such as atrial fibrillation and hypertension, seen with the first-generation ibrutinib (Imbruvica).

Zanubrutinib is already approved for use in mantle cell and marginal zone lymphomas and Waldenström’s macroglobulinemia.

Now it has also shown efficacy in CLL. In two phase 3 clinical trials, zanubrutinib has shown improved outcomes and reduced toxicity when compared to more established treatments in patients with relapsed/refractory and untreated CLL and SLL.

However, experts question whether the drug will find its place in an increasingly crowded space for the management of CLL.

The ALPINE trial compared zanubrutinib with ibrutinib in 415 patients with CLL/SLL and showed that the novel drug was associated with a significant improvement in overall response rate, at 78% versus 63%.

This first interim analysis also showed that there was an increase in progression-free survival (PFS) with zanubrutinib, and crucially, it was associated with a lower atrial fibrillation/flutter rate than ibrutinib.

The SEQUOIA study looked at zanubrutinib versus bendamustine plus rituximab in patients with untreated CLL/SLL with a 17p deletion and showed that PFS was improved with zanubrutinib by 58%.

Zanubrutinib was also associated with improved overall response rates and was well tolerated.

“But it has got quite a lot of, especially cardiac, problems, with atrial fibrillation and hypertension,” she told Medscape Medical News. The problem is that it acts not only as an inhibitor of Bruton kinase, but also affects other kinases, she explained.

Zanubrutinib is “much cleaner,” continued Walewska, who was lead author of the recently published British Society of Haematology guideline for the treatment of CLL.

However, the drug “is not that groundbreaking,” she commented, as acalabrutinib (Calquence), another next-generation BTK inhibitor, is already available for use in the clinic.

“We’re really lucky in CLL,” Walewska said, “we’ve got so many new drugs available, and it’s getting quite crowded. Trying to find a place for zanubrutinib is going be tricky.”

Lee Greenberger, PhD, chief scientific officer at the Leukemia & Lymphoma Society, commented that he “gives a lot of credit” to BeiGene, the company behind zanubrutinib, for “taking on these big studies.”

He said that, with the improvements in PFS and reduced atrial fibrillation with the drug, “there will be many clinicians paying attention to this and zanubrutinib could be preferred over conventional options.”

However, he agreed that it will have to compete with acalabrutinib, adding that, beyond BTK inhibitors, there are “a lot of options” for patients with CLL.

“That makes it very difficult for physicians to figure out what is the best type of therapy” to use in these patients, he added.

Greenberger told Medscape Medical News that further studies will need to demonstrate that zanubrutinib is associated with extended survival, which is “just not possible to show” at the moment with the current follow-up period.

He also noted that, in 10 years, ibrutinib will be off-patent, but zanubrutinib will not, at which point the “substantial” cost of the medication, which is a source of “hardship to patients,” will be increasingly relevant.

The phase 3 ALPINE study involved 415 adults with CLL/SLL refractory to ≥ 1 prior systemic therapy and measurable lymphadenopathy on imaging.

They were randomized 1:1 to zanubrutinib or ibrutinib until disease progression or withdrawal from the study.

Most patients had Binet stage A/B or Ann Arbor stage I/II disease, and 7.3% of patients treated with zanubrutinib and 10.1% of those assigned to ibrutinib had received more than three prior lines of therapy.

Over 60% of patients were aged 65 years or older and around 70% were men, with no significant differences between treatment groups.

Patients were randomized 1:1 to zanubrutinib or ibrutinib until disease progression or study withdrawal.

Subgroup analysis confirmed that the effect was seen regardless of age, sex, disease stage, number of prior lines of therapy, mutation status, or bulky disease.

Patients treated with zanubrutinib experienced more grade ≥ 3 adverse events than those given ibrutinib, at 55.9% versus 51.2%, although they had fewer adverse events leading to treatment discontinuation, at 7.8% versus 13.0%.

More importantly, there were fewer cardiac disorders of any grade with zanubrutinib versus ibrutinib, and any grade atrial fibrillation was significantly less common, at 2.5% versus 10.1% (P = .0014).

Rates of hypertension and hemorrhage were similar between the two treatments, while rates of neutropenia were higher with zanubrutinib versus ibrutinib, at 28.4% versus 21.7%.

The phase 3 SEQUOIA study looked at an earlier stage of disease and included patients with previously untreated CLL/SLL (without 17p depletion) who were unsuitable for treatment with fludarabine, cyclophosphamide, and rituximab.

This trial involved 479 patients randomized to zanubrutinib or bendamustine (days 1 and 2) plus rituximab for 6 cycles of 28 days each (B+R).

The median age of patients was 70 years and approximately 80% were at least 65 years old. Just over 60% were men and most (over 70%) were from Europe.

These results held whether patients were stratified by age, Binet stage, bulky disease, or 11q deletion status, and for patients with an unmutated, but not mutated, immunoglobulin heavy chain gene.

Rates of adverse events of any grade were similar between the two treatment groups, although B+R was associated with a higher grade ≥ 3 adverse event rate, at 79.7%, versus 52.5% for zanubrutinib, and a higher rate of treatment discontinuation due to adverse events, at 13.7% versus 8.3%.