‘Brain scanners are bringing about a revolution in neurolinguistics’ 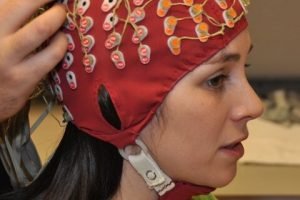 Brain scanners have radically changed neurolinguistics. They are increasing our understanding of how the brain processes language. Professor Niels Schiller has produced a standard work on this.

You compiled the Oxford Handbook of Neurolinguistics. If you take a helicopter view of the field, what stands out?

In terms of methodology, much has changed over the last decades. Brain scanners, in particular, are bringing about a real revolution. You can now study someone’s brain activity while they are doing a language task. You immediately see which regions are active when someone is completing such a task. Furthermore, we are getting better at studying the connections between these brain regions.

What research findings has this generated in recent years?

For a long time, people thought that one specific region of the brain was fully responsible for performing certain linguistic functions, such as conjugating words or retrieving sounds from the memory. But it is gradually becoming clear that connection is more important than classic activation. Regardless whether you need to interpret a sentence semantically or name an object, it is often networks of neurons and different regions of the brain that work together to complete such a task.

Why is it important to study language processing in the brain?

You need to know about language processing so that you can understand what happens when things go wrong. Imagine someone has had a stroke and now struggles to find the right words. Where exactly in the brain have things gone wrong? And which regions of the brain influence each other? Only when you know this, can you work on solving the problem. By the way, this is extremely tricky in the case of strokes: there is often too much damage to return to the old level. At the most, another area of the brain can take over these functions.

And what do you hope to discover in the coming years?

At present, I am researching to what extent different languages are represented in the brain. Take the vocabulary: which regions of the brain are active here? And do other regions become active if you aren’t learning your native language but a second language instead? I hope to have gained a better idea of this in a few years’ time.

The Oxford Handbook is a prestigious standard work for all your colleagues in neurolinguistics. Why were you chosen to publish this book?