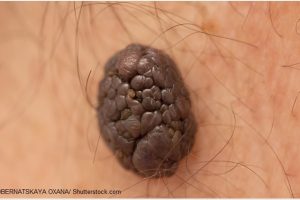 Epidermal nevi are benign proliferations of one component of the epidermis. They are often derived from post-zygotic mutations in one of the RAS genes or the FGFR3 gene, or the PIK3CA gene. These genes deal with the regulation of cell growth and differentiation. When they are mutated, they give rise to proteins which no longer require external activation to be switched on.

Their autonomous activity leads to overgrowth of the affected cell population. The importance of this condition is that the mutation is restricted to only one line of cells, which undergoes cell division in an unrestricted manner to spread along the lines of Blaschko. At the same time, the non-mutated normal cells in between the epidermal nevi form normal skin. 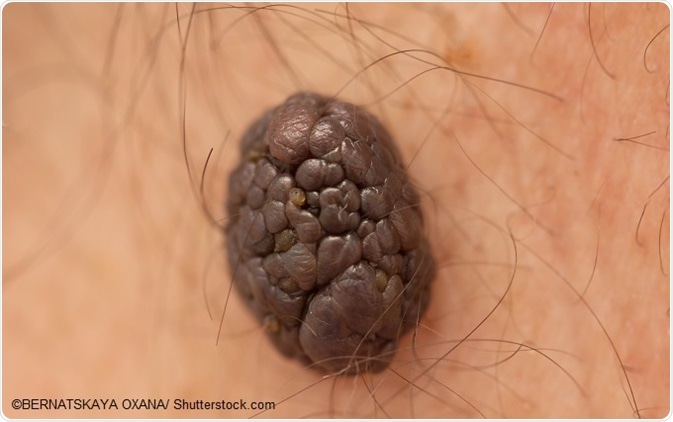 Epidermal nevi are unsightly but cause few or no symptoms. In one type called the linear inflammatory verrucous epidermal nevus, there is intense pruritus around the lesion. Mostly, however, they remain stable and non-problematic. It is rare that these nevi give rise to other growths, but when they do, it may be benign, such as the syringocystadenoma papilliferum, or malignant, such as a basal cell or squamous cell carcinoma of the skin. For this reason, any change in an epidermal nevus must be seen by a dermatologist and a biopsy done to rule out cancerous change.

Whether they cause symptomatic distress to the individual affected depends upon the size, location, appearance, and progress. Large lesions in places which are quickly seen may cause more embarrassment than hidden and small epidermal nevi. Moreover, their association with extracutaneous manifestations of a serious kind, such as anomalies of the bone, brain, and eye, can alter the prognosis significantly.

In an overview of several epidermal nevus syndromes, it is observed that epidermal nevi on the head and face are more commonly associated with central nervous system manifestations, with brain, skull, and eye abnormalities. These include mental retardation, epilepsy, ocular abnormalities, and cysts or aneurysms inside the brain, with the defects occurring on the side opposite the cutaneous lesions.

Epidermal nevi on the torso, however, are sometimes found to be linked with defects or maldevelopment of the bones of the spine, the pelvis, and the appendages, both lower and upper. These may present as spinal curvatures and hip dislocations. Frontal bossing and bone cysts may occur, as well as vitamin-D refractory rickets. This is characterized by weak bones causing bowing of the legs and leg pain, softening of the bones, limping, multiple rib and thigh fractures, and impairment of growth leading to short stature.

Sebaceous nevi of the head are known to be linked with the later development of basal cell carcinomas or trichoblastoma. However, this is a very minute risk, and cancer prevention is therefore not a focus in the treatment of sebaceous nevi. In some cases, sebaceous nevi occur as part of the far more serious Schimmelpenning syndrome. This presents with neurological symptoms and signs including epilepsy, developmental delays which manifest as delayed milestones, mental retardation, and cysts or aneurysms of internal brain structures. Colobomas, corneal opacities, and strabismus, as well as optic neuropathy and retinal detachment or retinal scarring are among the ocular manifestations of this condition, as is the epibulbar lipodermoid. The latter is a fatty tumor, occurring on the outside of the eyeball.

Other syndromes include phakomatosis pigmentokeratotica, with neurological signs including epilepsy and hemiparesis, as well as disorders of skin sensations and hemiatrophy; Proteus syndrome, with various structures in the body showing gross overgrowth; and CHILD syndrome, with skeletal, neurological, and visceral abnormalities, almost always found in women.