How do metastatic tumor cells grow in lymph nodes? 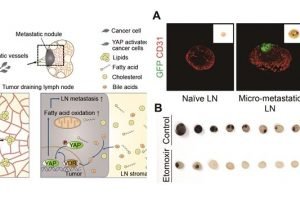 The spread of cancer to a new part of the body accounts for about 90 percent of cancer deaths. Cancer cells can spread from sites of origin to other parts of the body through blood vessels (blood-borne metastasis) or the lymphatic system (LN metastasis). By invading surrounding lymph vessels, cancer cells migrate to adjacent lymph nodes and become a colonized tumor, leading their way to other organs. If they adapt and grow in lymph nodes, the cancer cells can easily reach other organs, resulting in a worse outlook for patient’s survival.

Medical oncologist Dr. Choong-kun Lee, cancer biologist Dr. Gou Young Koh, and their colleagues at the Center for Vascular Research within the Institute for Basic Science (IBS) and Korea Advanced Institute of Science and Technology (KAIST) in Daejeon, South Korea, have revealed a mechanism to suppress the growth and spread of cancer cells in lymph nodes, forestalling any chance for them to invade new territories of the body.

Lymph nodes are tiny structures that contain immune cells to fight harmful substances such as cancer. Despite the underlying mechanism of immunity, cancer cells can adapt and grow in lymph nodes. This lymph node metastasis status is critical in cancer staging and prognosis. IBS researchers hypothesized that the migrated cancer cells must have an alternative mechanism to survive and grow in lymph nodes, which is different from where they begin.

The researchers used animal models with melanoma and breast cancer, which are considered to be most likely to spread first to lymph nodes. With the comparison of cancer cells grown in lymph nodes with those grown in the primary site, the researchers found that the metastatic cancer cells in lymph nodes boost the expression of the genes related to breaking down fatty acids to produce energy in a process known as fatty acid oxidation (FAO).

In the meantime, the cancer cells growing at primary site promote the expression of the genes involved in glucose used as an energy source (the well-known “Warburg” effect). In addition, they also found that unlike other organs, lymph nodes are rich with a variety of lipids. Dr. Lee says, “These unexpected results gave me strong confidence that lymph node metastatic tumor cells preferentially use fatty acids rather than glucose as a fuel source in the lipid-rich lymph node microenvironment.” He confirmed the findings with the almost complete suppression of lymph node metastasis by treating a clinically tested fatty acid oxidation inhibitor to melanoma or breast cancer-bearing mice. 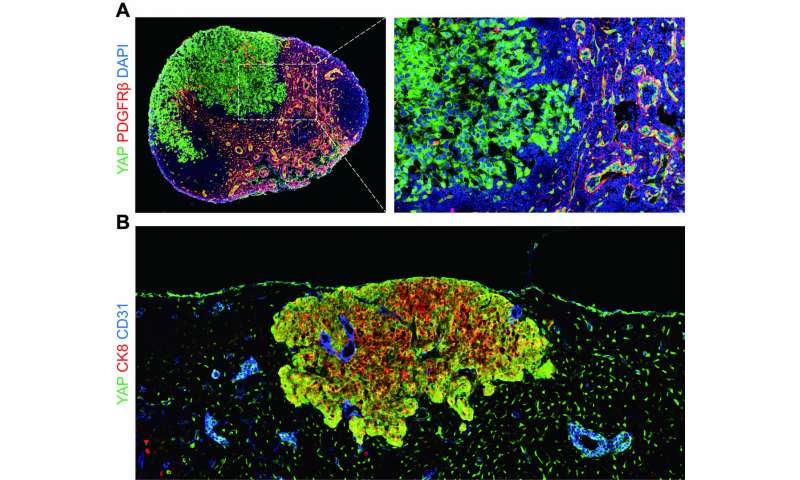 The researchers sought to find the intracellular signal responsible for triggering such a metabolic adaptation for the metastatic tumor cells to use fatty acid as fuel. Using extensive screening and analyses, they identified yes-associated protein (YAP) as a crucial driver molecule for stimulating fatty acid oxidation in the metastatic tumor cells at lymph nodes. Dr. Koh says, “We were lucky to find a link between this unusual metabolic adaptation and YAP activation in the lymph node metastatic cancer cells. YAP activation was also found in the metastatic lymph nodes of patients with melanoma.”

To find out the major stimulator for YAP activation in lymph node metastatic tumors, the researchers looked into biological samples. They found that the abundance of several bile acid species—known to be detected only in the liver and intestinal tract, where they facilitate dietary fat digestion, was strikingly elevated in the lymph node metastatic melanoma.

Cancer cells are smarter than expected in their dissemination in the body. Dr. Koh says, “This study reveals how they adapt to a challenging environment like lymph nodes by switching their energy source to locally abundant molecules such as fatty acids and bile acids to make their way to other organs.” Therapies targeting FAO and YAP are currently available or being actively developed. By drawing on the link between FAO /YAP and lymph node metastasis found by this study, doctors may be able to suppress subsequent distant metastasis in patients with melanoma and breast cancers. Dr. Koh adds, “It definitely warrants more extensive investigations in patients with metastatic cancers prior to clinical applications.”